At the end of March, CMS announced the annual new lab test public meeting for pricing would be June 25, and a national webinar for the lab advisory panel would be July 16-17 (here).  Registration for the June meeting opens on April 4 on the CMS CLFS website; for presentations, powerpoints are due June 11.

On April 3, CMS posted the new AMA CPT lab codes for CY2019.  See the CMS home page for the annual meetings and scroll to the bottom for "CODE UPDATES" and "CY2019."  Here.  You'll get an excel spreadsheet.

Don't be surprised if CMS updates it from time to time, however. 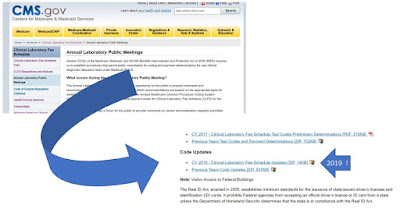 Here comes my informal list, from various AMA actions, of 2019 Cat I Lab CPT Codes that I don't see on the initial CMS code list.  There may be as many as 54 new Cat I lab CPT codes, driven in part by the 30 new Triple Repeat codes.

If I'm correct, the meeting will be handling the 32 new codes (PLA, etc.) already released by CMS plus another 50-odd new Cat I lab codes, or a total count in the 80s.

Last September and November, CMS announced its preliminary and final crosswalks for these two codes.