Brief Blog: The NUB Regulation as a Form of CED in Germany

You learn something every day.   Today I heard about the German NUB regulation, which has some features of CED.

NUB was introduced after Germany discovered post 2003 that its DRG inpatient system made it hard for hospitals to innovate.   (USA Medicare has a "New Technology Add-on Payment" or NTAP for our DRG system.)

It's a more hospital-based system in which a hospital can contract for one year or two of special payment for a new device while data is collected.  The device must be CE marked and used less than 3 years in Germany and cost > €500.

Once you've heard of NUB, you start to see it in press releases, e.g. this 2018 press release for the BIOVENTRIX transcatheter device. 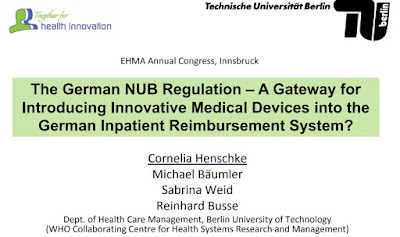 There seems to be another German system called "137E" which I've seen cited as supporting rollout of cancer drugs, e.g. here.  See also a 2014 article by Olberg et al. on CED/137E in Germany, here.  NUB is a limited DRG focused program, 137E is a broader CED concept.

Hoffman et al. have just an conference abstract on NUB in Value in Health 2016.  Here.

ISPOR has a 2011 detailed webpage on the whole complexity of the German System (includes a bit on NUB).  Here.

The 24-page Assessment in Medicine (AIM) document is on the website of IGES, a technology institute that may be a university spinout, here.