Numerous news outlets cover the Executive Branch's changes in Obamacare policy in real time.  However, it can be difficult to find the original sources, such as the actual text of the Executive Orders.  ( recently gave an example in this blog that links to the executive orders, past executive orders, rulemaking, regulation, etc, on the Contraceptive Religious Exemption issue, here.)

For several years, Timothy Jost, emeritus professor at Washington & Lee Law School, has provided rapidly updates on federal health policy at the Health Affairs blog (here).   Lately, his lengthy analyses have been appearing in record time, often less than 24 hours.  He provides links to original documents that are often missing in journalists' articles. 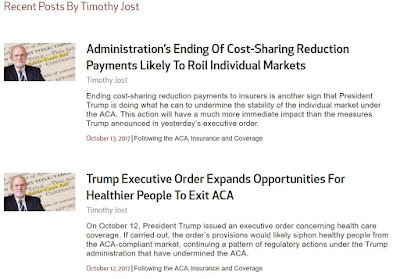 Often lost in the excitement about Executive Orders is that they can differ greatly in their actual content and effect.   For example, if there was an Executive Order to immediately close the border with Mexico to all traffic, due to emergency conditions, that would have a huge immediate effect.  Other policy measures are couched as Executive Orders (with pomp and circumstance) but need not be in that format.  The E.O. regarding lighter health plans, for example, directs the HHS to "consider proposing regulations, or revising guidance" on the topic.  This could be conveyed equally effectively by a press conference remark, internal instructions, an action item delegated at a Cabinet meeting, a paragraph in a speech, or even a tweet.  It gets higher visibility by being couched in the format of an executive order.

As discussed in the citations to Sessions and Collyer above, the ACA issue is that the ACA created tax credits for individuals (S. 1401) and funding for low income persons directly paid to insurers (S. 1402; also called CSR's, cost-sharing reduction), but the ACA provided a clear appropriation of funds only for S. 1401.

Til now, payments have nonetheless been issued as due under both S. 1401 and S.1402.  In layman's terms, the issue involves what to do when there is an apparent error in law.  On the one hand, we want laws to be enforced as written; on the other hand, we don't want national processes to grind to a halt every time there is a typo.  (Sessions directly discusses the Supreme Court decision in King in this regard; link above).  Alternatively, the law could be correct as written; S.1402 could be quite deliberately dependent on annual appropriations from the House -- appropriations which the House isn't making.  (Another topic in the court action is whether the House had standing to sue the executive branch in this way.)