According to an article in MobiHealthNews, a new coalition of startups in the "digital therapeutics" space has formed.   This is another example of how digital is transforming healthcare delivery in ways that go far beyond EHRs or telemedicine, which are represented by older trade groups.

The article is online here.   Sean Duffy, CEO of Omada, is prominently quoted.

Recently I noted that the CHRONIC care act has bumped around the Hill for several years, and includes a section improving telemedicine benefits and how they are paid/accounted for in Medicare Advantage plans.   That section of the bill will save Medicare $80M a year (!!!), as scored by the conservative CBO, so there's absolutely no reason it can't pass.  Still, it doesn't get done.   Hopefully, the Digital Therapeutics Alliance (DTA) will help the policy system get unstuck. 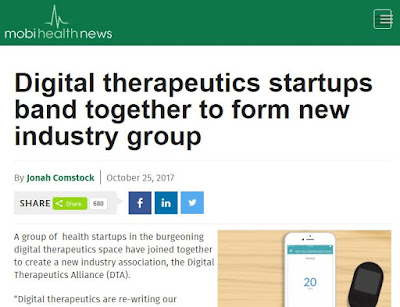