CMS normally awards MAC contracts on a five year recompete cycle, and recent legislation let CMS extend that to ten years.   But don't count on it.   In March 2016 (here), CMS announced a MAC contract solicitation for Jurisdiction J, even though the contract had been awarded to Cahaba only 18 months earlier in September 2014 and would normally last til 2019 if not 2024.

On September 8, 2017, CMS announced that the new awardee for Jurisdiction J will be Palmetto GBA, winning a contract worth $275M.

It's on the MAC What's New Page (here), but as late as 9/21, CMS hadn't yet updated the main Jurisdiction J page yet (here). 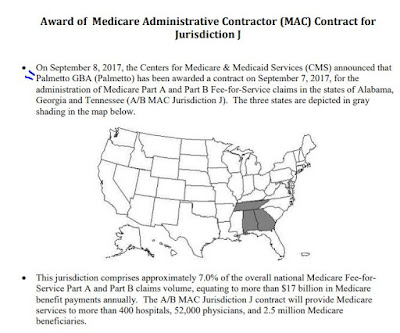 In 2015, GAO issued a 2015 page report on whether new approaches to MAC contracting and incentives were advisable, here.