On Tuesday, August 1, the PAMA Laboratory Advisory Panel will convene at CMS and at 230 pm, will begin to address conflicts and dilemmas between PAMA pricing rules and the arcane rules through which CMS pricing clinical chemistry panels.   Be there or be square.  But before you go, brush up on the report of the 2016 Panel Test Pricing Subcommittee, here.

For details of how these tests are utilized in the Part B Medicare population, after the break.

In a numbing display of attention to unlikely minutiae, CMS has rules for when parts of a clinical chemistry panel are performed by different labs in different pricing zones - for example, if a Des Moines lab performs the potassium but refers the sodium to a reference lab in Chicago.  See here for this rule, which we are instructed not to apply if it is on or before March 30, 2005.

Volume by Units and Dollars

I was curious how big these tests were.

However, Lipid Panel and Comprehensive Metabobolic Panel are about 85% of the dollar volume.   The busiest panel had 28M uses, the least busy had only 168K uses.  Click to enlarge.

I imputed the average price paid by divided total annual dollars paid by unit volume of each panel.  This has to be a little less than the NLA fee schedule price[*], because some states pay less than the maximum NLA and because a few patients hit deductibles.

However, the % of the imputed price to the NLA price varies, and can be quite a bit less than the NLA, most strikingly, for 80051, Electrolyte Panel.  I looked at the data on 80051 four or five times, recalculated, and keep getting an imputed average paid price of $4.55 versus a fee schedule price of $9.55.

(Sniff check: About 400K tests, about $2M dollars, about $5 dollars a test.)  I'm not sure how 80051 test payments per test can be only half the NLA, but here's a theory.  There is a rule that if tests are ordered together and certain analyte components overlap, avoiding paying for any analyte twice.  Thus, depending on the particular order, a first panel for 7 analytes and a second overlapping panel for 9 analytes doesn't pay the sum of those two panel prices, but a lower price that is pro-rated based on the sum of the non-overlapping analytes.

Another historical curiosity, among the several longstanding panel codes, 80061 stands out by having no NLA.  Looking up and down the CLFS, it turns out that quite a few old classical tests have no NLA, though most do.

How Much CMS Saves By Having a Panel Price Ceiling

How much difference does the "ceiling" panel price make?  I looked at two of the codes, and tallied the individual test prices against the collective panel price on the CLFS fee schedule.   Click to enlarge.

The prices for panels are based on "ATP" or "automated test payment" prices, which changes by ten or twenty cents for each additional test.  ATP07 for 7 tests, like 80076, is $11.11, while ATP20 for 20 tests is $15.53 -- all in 2015 prices, to match the utilization data.  ATP pricing is found down at the bottom of the fee schedule and sets the prices for the $700M of tests.   Medicare's PAMA dilemma is that labs never bill ATP codes as claim lines and so there's no way to update the internal ATP price values under PAMA price surveys.[**]

A Single Table of the Tests

Not very readable, but a table of the panel and test components here: 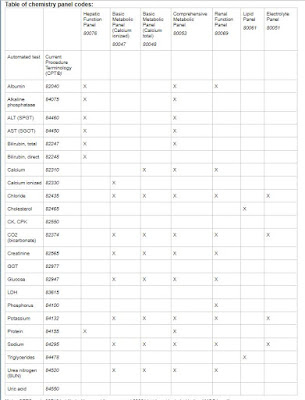 The ATP prices set the prices of both fixed panels and the prorated partial panels that result if two panels are ordered but have overlapping analytes.  For example, $11.11 doesn't just happen to be the price of the particular hepatic function panel 80076; it is the prix fixe for 7 analytes in the chemistry panel pricing system.  You'll find that reference generic code ATP07 = $11.11 and therefore 7-analyte Hepatic Panel 80076 is also $11.11.  Any other 7-analyte panel would also be $11.11.

For an even deeper dive into the quirks and values of panel pricing, sidebar here.
___

Total Payments for Chemistry Panels and Genomic Tests Are Similiar

___
[*] Historically, CMS lab fee schedules were set at the state level, and later a national cap - national limitation amount or NLA - was created, which exists for most codes.

[**] My impression has been that since PAMA law sets statutory test prices by CPT codes and their reported market prices, CMS lacks authority continue using the policy-based ATP system to "craft" its own fictitious price levels for lab tests.  Why and how it does that exists in neither statute nor regulation. CMS should define what it is doing in regulation since it is now an example of older CMS policy maneuvering around a newer Congressional statute which should, normally, supercede the older policy.  At close to a billion dollars, it's a lot of money, not a trivial detail.