As noted in earlier blogs, CMS posts Part B data by provider name and CPT code for 2012, 2013, 2014, 2015.  The data can be displayed in a web interface that is very easy to sort and then download filtered data in Excel.

Although I'd usually post the Excel file in the cloud for you, it feels awkward to do so, because even though the data is publicly available, it contains hundreds of physician names, addresses, and NPI numbers.  However, you can easily find the data yourself or download it yourself [*].

Lines Required to Reach 50% of Payments
The second highest was $32M to Ambry Genetics for "unlisted code."  Just 12 claim lines out of 2000 total claim lines reached $240M or 50% of all payments for the year.

California Versus New York
No contest.  California had 57% of all CMS mopath payments, whereas New York had only 0.3%.   New York State has a unique governmental review apparatus, almost like a mini FDA, for genetic test approval before public offering to people in NY State (here).

You Can Get All USA Laboratory & Pathology Code Data
I also tried pulling down all 8xxxx series codes.  This initially gave a 100MB file, which opened in Excel.  I deleted superfluous columns like first name and street address.  It then saved as a workable Excel spreadsheet of 70 MB and 880,000 lines, which I was able to open and run (albeit slowly) on a Windows 10 laptop in Excel.

At the newly released CMS website for 2015 data, here, click on "ADD A NEW FILTER CONDITION" and then SEE "FILTER" dialog box, and then filter forthe field-name HCPCS CODE (drop down menu) with the method "STARTS WITH" (drop down menu) and starting with with any of these: 812, 813, 814, or 815. See picture. 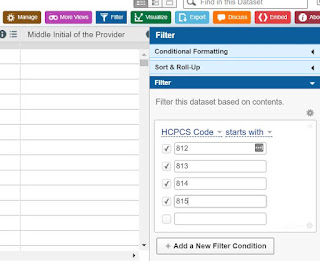 Having done that and hit return, click the pale blue button EXPORT and download as an Excel CSV file.  (I recommended immediately opening and resaving as an Excel Workbook).  If you've done what I did, it's a file of about 2000 lines.

Finally, I recommended creating one column that CMS doesn't give you, which is services allowed * dollars allowed per service.  This gives you total payment for that provider by CPT code for 2015.  Data can now easily be sorted by dollar volume, provider, state, CPT code, etc.