Brief Blog: The Short and Obscure Life of the CMS Date-of-Service Demo

The Affordable Care Act included Section 3113, a demonstration program for up to two years and up to $100M of lab tests, under which reference labs could direct-bill CMS for advanced lab tests.  Because the project blocked tests using "unlisted codes," tests like Oncotype DX could not use the demo, since they did not yet have CPT codes.   CPT assigned the eligible CPT codes primarily as the historic molecular "stack codes," which were deleted by CMS and CPT in mid-demo.

Nonetheless, consistent with Congressional intent, CMS released a report on the demo project.  The report has a cover date of 2015 and a PDF edit date of January 6, 2016.  The report concludes that due to "extremely low utilization" no conclusions on impacts of the demo project could be made.

Only 173 of the 458 beneficiaries with "tests billed" had "tests paid."  Total payments under the $100M demo were $35,000 for independent laboratory claims and $5,500 for hospital outpatient claims.

The report is online here. 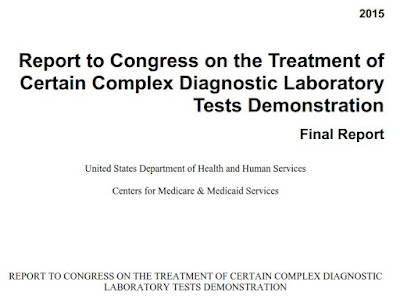