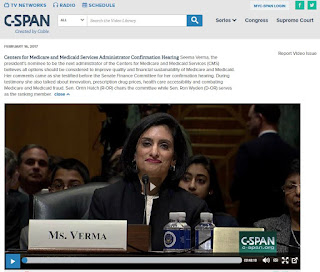 My original November 2016 collation of articles on Verma, including some updates, is here.

More after the break.
Senator Hatch (prepared remarks; paraphrasing and summary is entirely my own, these are not quotations):

*  To load on your iPhone for your commute or gym time, CSpan will let you download an MP3 file for 99 cents.

** Although as governor of Indiana, Mike Pence was a highly conservative Republican, and although the state voted 3:2 for Trump, Indiana has had a mix of Democratic and Republican Senators over the past 20 years.  Indiana's Senator Richard Lugar (R) served for 36 years, 1977-2013, e.g. from the Carter to Obama administrations.