Diabetes prevention has been rising in public policy circles, with landmarks like Medicare's creation of a new Diabetes Prevention Program benefit through its Center for Medicare Innovation (here).   The program will include virtual prevention programs (e.g. see Omada) as well as brick-and-mortar one.  In the digital space, other alliances are forming, such as between hardware manufacturers of blood glucose monitors (like Ascensia and Roche) and app/cloud/physician platforms like Glooko (here).   Glooko is deliberately designed to work across many devices, so it can be used by ACOs or clinicians with large numbers of Type 1 and Type 2 patients on diverse meter hardware.

Despite multiple studies with up to ten year outcomes (here), some questions are still raised about the real-world long term impact of diabetes prevention programs, as flagged in a BMJ review article in January 2017 (here).

In December 2016, American Journal of Managed Care has published a full special issue on diabetes prevention & management, including in the ACO setting (to reach it, click through this article to the PDF button at the end: here).  AJMC also has a special website for diabetes-related articles and news, here. 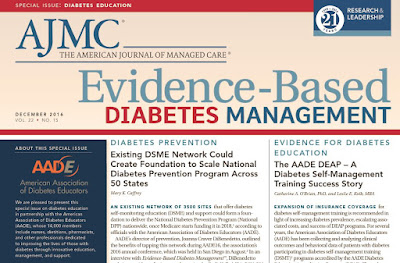 The 21st Century Cures legislation has an "Easter egg" benefit for Medicare diabetes patients on insulin pumps at Section 5004.  It changed reimbursement for pump-based drugs in technical ways which, on average, will save CMS money on drug costs, but will raise Medicare payments for insulin closer to market rates today.  Multiple sources had reported that due to arcane accounting mechanisms, static Medicare rates for pump-based insulin had become so low that access for beneficiaries was notably impaired.