We're frequently confronted by the scale of the next generation sequencing (NGS) industry, but I was uncommonly struck by the scope and scale of a conference this week in Washington DC, where I'm chairing a panel on federal payment reform in diagnostics.

The clinical literature is growing at a hockey-stick rate as well, as shown in the graphic below that culls PubMed for the term "clinical exome."  There were 2000 publications using this search term in the last several years, up from a near standstill in 2011. 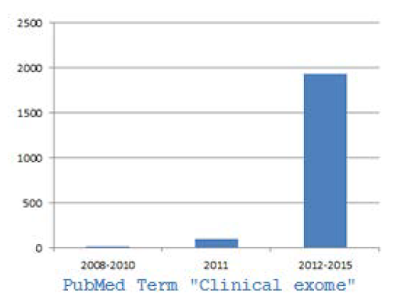 More after the break.
The current conference is the August 18-20, 2015 "Seventh Annual Next Generation Summit" in Washington DC, taking over the Capital Hilton.  It offers so many speakers in its 39-page brochure it would take a half hour just to count them.  (Conference site here, agenda here or here).

The conference has ten different tracks (even admitting that some talks overlap in more than one track):

Note that not all the topics involve advanced sequencing, although most do.

I counted over 160 events (a few will overlap among tracks), at least 15-20 of which are panels of 5 speakers.  Half the topics shown above run on Tues-Wed, and half run on Wed-Thurs.

A conference with circa well over 100 independent sessions is a really big conference.