One of the issues with the multi-MAC MolDx system is that all four of its participating MACs must post draft LCDs, before they can be reviewed and finalized.

In June 2022, I wrote about a complex MolDx LCD for molecular melanoma diagnostics (here, DL39345, released June 23).  It looks like this draft LCD was not posted until October 6 in the CGS MAC jurisdiction (here, as DL39389).  Comment til November 19, while there public meetings separately in KY and OH on October 25 and 26.

My earlier June blog provided a full discussion (DL39345).  Since then, AMP has submitted public comments opposing the requirement the test be ordered by a dermatopathologist only (here).

I don't believe I noticed earlier, this draft LCD has a Request Letter provided.

While the 14 page PDF has no date (or date redacted), I noticed the final title of the PDF was "Final 15 Jan 21" suggesting a review time of about 18 months between the request submission and the draft LCD's first posting in June (and 21 months, til the posting in the CGS MAC.)

This suggests about 30 months (2.5 years, or longer, depending on the CGS timeline) between the submission letter and the final LCD (and, add 45 days for the final LCD to become effective.)

According to the 14 page request, Castle met with MolDx in October 2020 to help plan its January 2021 LCD submission and rationale.

Although there's no name or date on the letter, the splash screen for the issue description and requestor information says it's from Matthew Goldberg MD. 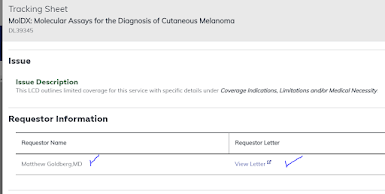 "Read How a MOLDX LCD Request Letter is Written"

Note the request letter is posted at CMS, not at a MAC.   A duplicate cloud copy here.

Foundational LCD and the Paradox of "Comparable to Covered Tests"

The LCD is a "foundational" or umbrella LCD that will cover future tests on a rolling basis if MolDx determines that they have "equivalent or superior performance to covered tests."

However, this is trickier than it sounds.

Many tests might be listed in the associated billing article only under the generic code 81479 (other molecular test), therefore, it would be hard for the reader to know what covered tests to look up, to compare their performance.

These 0090U Myriad Mypath (now acquired by Castle) and  Castle DiffDx.

0314U is being priced.  A majority of CMS advisory panelists last summer recommended to crosswalk 0314U to 81529, which DecisionDx Melanoma, an ADLT test at $7193, one of the highest price tests on the whole lab fee schedule.   4 panelists recommended a crosswalk to 0090U, which CMS preferred.  This MyPath test is $1950, the crosswalk price being offered by CMS and far lower than $7193.

ADLT rules require that the test be made by the original developer, not simply licensed in, and not sold (unless a lab is acquired by a successor owner).  However MyPath 0090U appears to have been "acquired" by Castle.  And it's still listed as an ADLT.   This suggests that CMS applies the "not bought or sold" rule at the original time of deeming a test to be an ADLT, and CMS does not apply the rule again if circumstances change.

(While in some places the rules are vague about whether a "lab" or possibly "a test" is being sold, others define this as "a successor owner of the laboratory" and not "of the test.")

Why is 0314U Diff Dx being priced by CMS, why isn't Castle requesting it be an ADLT?

According to the MolDx DEX Test Registry as of 10/2022, DiffDx is "not covered" so it can't apply to be an ADLT yet.