Bullet - Report Language from House and Senates proposes USPSTF funding, asks for improvements and reforms.
Background
The United States Preventive Services Task Force endorses services that are required coverage under the Affordable Care Act for commercial insurance.  And the USPTF is a gatekeeper for endorsements that can lead a service to be adopted as a preventive service for Medicare (via an NCD).   So the USPSTF is pretty important.   While preventive services can be of many different types (e.g. smoking counseling), some are diagnostic tests.  It's generally felt that after a new preventive diagnostic test is approved by FDA, USPSTF is both a gateway and a barrier to becoming a preventive medicine insurance benefit.
Eshoo Pallone Letter
A few weeks ago I covered a detailed and strongly-worded letter from Representatives Pallone and Eshoo to Health and Human Services, asking HHS to modernize and speed up the USPSTF - here.  Besides the blog, I did a brisk and entertaining video.
New News - Report Language
Now there's new news.  Each summer, House and Senate release hundreds of pages of "report language" as part of the annual budget process.   They make requests of agencies (these polite requests from the Hill are not as hard to get as new laws).   Sometimes it sounds like log-rolling, "The Senate asks NIH to prioritize research on Disease XYZ" and the NIH responds the next year, "Disease XYZ is a high priority for us and we continue to use appropriate opportunities to invest in XYZ research."
This summer, both House and Senate include report language directed towards speeding up and improving USPSTF.
House here:
https://www.congress.gov/117/crpt/hrpt403/CRPT-117hrpt403.pdf
Senate here:
https://www.appropriations.senate.gov/imo/media/doc/LHHSFY23REPT.pdf
House asks for "comprehensive USPST reform" and asks for an update on this reform within 120 days.   House also raises concerns whether USPTF keeps up with innovation, and whether it prioritizes new tests (or medications) approved by FDA for prevention.  The House wants an update on USPSTF's plans for an Early Update Process.
Comments at Senate are similar: 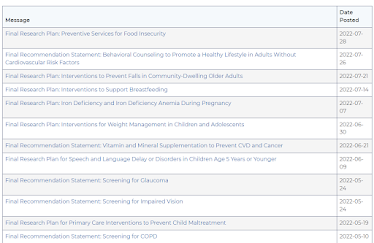