This past week, see a press release from the office of Representative Eshoo (D-California) on the need to speed up processes at USPSTF.   USPSTF decisions control required preventive benefits for commercial health plans, and are a key gateway to new preventive benefits at Medicare as well. 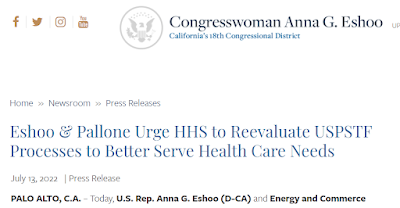 I've clipped the text of the letter to HHS after the break.  The letter describes a little bit of slippage in USPSTF funding.  There's some history there.  I recall a Trump HHS budget in 2018 that would have cut USPSTF in half (not enacted).  In 2017, there was a proposal to dissolve AHRQ as part of HHS and move it inside NIH (see Health Affairs here). similarly drastic cuts in a House budget in 2015 here.

There wasn't much press coverage that I could find; the McGuire Woods consulting firm mentioned the letter here.  Compare the 2017 House bill HR 529, "USPSTF Transparency and Accountability Act," which garnered a couple dozen cosponsors, here.

The USPSTF is an independent, volunteer panel of national experts in disease prevention and evidence-based medicine that makes recommendations about clinical preventive services such as screenings, counseling services, and preventive medications. Under the Affordable Care Act, private insurers must cover preventive services recommended by the USPSTF with a grade of A or B with no cost-sharing.

“Due to the extensive time gap between updates, as well as the lowered funding for the USPSTF over the past two years, new interventions and/or evidence may dramatically change clinical practice years before the USPSTF releases an updated recommendation.  This creates a lag between availability or knowledge of an effective intervention and insurance coverage or access for patients,” wrote the Members. “This issue has never been more urgent: across the country, preventive cancer screenings plummeted by as much as 94 percent during the first four months of 2020.”

We write to you today to discuss the critical role of the United States Preventive Services Taskforce (USPSTF) in ensuring that Americans have access to essential preventive services such as early cancer screening tests.  Early screenings and access to preventive services leads to early detection and diagnosis, which can dramatically alter an individual’s prognosis.

The USPSTF is an independent, volunteer panel of national experts that makes evidence-based recommendations about three types of clinical preventive services—screening tests, preventive medications, and counseling about healthy behaviors.  An A or B recommendation from the USPSTF indicates that there is high certainty that the net benefit is substantial and suggests providers should adopt this service.  These recommendations are intended to offer guidance to clinicians to improve clinical practice and promote the health of the American public.

In 2010, the Affordable Care Act (ACA) shifted the USPSTF’s role from a scientific advisory body to a body with the authority to influence federal benefit and coverage requirements.  Section 2713 of the ACA made preventive care, including recommended cancer screening, more affordable and accessible for millions of Americans by requiring coverage without co-payment, co-insurance, or deductibles for preventive health services with an A or B recommendation from the USPSTF.

However, the structure, process, and funding level of the USPSTF do not reflect its more recent role in influencing insurance coverage of preventive services. The fiscal years (FYs) 2021 and 2022 President’s Budget for the USPSTF was $11.5 million, $100,000 lower than the level of support from FY 2020.  Funding is important for the USPSTF to ensure it can acquire the necessary evidence to make recommendations and operate in a way to clearly disseminate recommendations to the health care community and the public.  The level of support in FY 2020 allowed the USPSTF to issue approximately 10-12 recommendations which often results in five to eight years between updates to recommendations for a particular preventive service.  Due to the extensive time gap between updates, as well as the lowered funding for the USPSTF over the past two years, new interventions and/or evidence may dramatically change clinical practice years before the USPSTF releases an updated recommendation.  This creates a lag between availability or knowledge of an effective intervention and insurance coverage or access for patients.

This issue has never been more urgent: across the country, preventive cancer screenings plummeted by as much as 94 percent during the first four months of 2020.  This decline is particularly concerning in the case of colorectal cancer where the rate of screening has stagnated around 65 percent, well below the Centers for Disease Control (CDC) goal of 80 percent of the eligible population. Furthermore, the rate is lower amongst Black, Hispanic and Native Americans where screening rates are 62 percent, 50 percent, and 54 percent, respectively, exacerbating the health disparities that already define cancer care in the Unites States.The National Cancer Institute (NCI) has predicted almost 10,000 excess deaths over the next decade because of pandemic-related delays in diagnosing and treating breast and colorectal cancer alone.

If and when blood-based screening tests for colorectal cancer receive approval by the Food and Drug Administration (FDA), it may still be years until the USPSTF releases its next recommendation for colorectal cancer screening to include these tests.  As new and more accessible screening modalities become available, the timeline of USPSTF recommendations may become the limiting factor in when these innovations reach the broadest scope of patients.

Recommendations for new and existing screening technologies would also benefit from more frequent review.  For example, a recent analysis based on the 2013 USPSTF recommendation for lung cancer screening found that among individuals diagnosed with lung cancer, 32 percent of Black adults who smoke were eligible for annual low-dose computed tomography (CT) screening compared to 56 percent of White adults who smoke.

The USPSTF acknowledged this disparity in its updated recommendation in 2021, stating “data suggest that Black persons who smoke have a higher risk of lung cancer than do White persons, and this risk difference is more apparent at lower levels of smoking intensity.” The 2021 USPSTF screening criteria lowered the level of smoking history required from 30 pack years to 20 pack years, increasing the relative percentage of eligible individuals by 78 percent in non-Hispanic White adults, 107 percent in non-Hispanic Black adults, and 112 percent in Hispanic adults.

To understand how the USPSTF process can be improved to better serve the healthcare needs of Americans, we respectfully ask the following questions:

When Congress authorized the USPSTF under subsection (a) of section 915 of the Public Health Service Act (42 U.S.C. 299b–4) it required the Department of Health and Human Services (HHS) to provide support via the Agency for Healthcare Research and Quality (AHRQ).  What staffing or administrative resources are being provided by AHRQ today?  Are additional staffing or administrative resources at AHRQ needed to do this work effectively?  If so, please outline what resources are needed.  If not, please explain why not.

USPSTF recommendations have important and substantial effects on the delivery of care.  Even small co-payments have been shown to reduce utilization of preventive services like cancer screenings. Quality measures for preventive services also typically follow USPSTF guidelines, creating strong incentives for both physicians and payers to provide needed screenings to the population that the USPSTF deems eligible.  Given these impacts, does HHS agree that the USPSTF, as it currently operates, is sufficiently nimble to provide patients with timely access to preventive services as new evidence arises?  If so, please explain why.  If not, please explain what additional authorities or resources are necessary to improve timely updates to USPSTF recommendations.

Organizations such as the National Comprehensive Cancer Network (NCCN) and the American Cancer Society (ACS) have adopted an ongoing and iterative review process of their clinical guidelines to match the rapid pace of advancement in cancer treatment options. Under these systems, availability of new evidence triggers a review of existing recommendations.

Has the USPSTF considered adopting a similar model to update its review process to better align with innovation cycles, such as initiating review upon FDA approval of a new screening technologies?  If so, what conclusion has the USPSTF reached regarding taking such steps?  If not, what are the reasons or barriers?

What resources and/or additional authorities are needed to initiate new or updated recommendations at a similar pace to other clinical guideline developers like NCCN and ACS?

The USPSTF manual outlines a process for topic updates earlier than the usual five-year time frame upon availability of new evidence.  To determine if new evidence should trigger early review, several criteria are listed, such as evidence of a “new intervention/strategy not previously considered” or “high public health burden of the condition.”

Has the USPSTF utilized this early review process to date?  If so, when and for what recommendations?  If not, please explain why.

Does HHS believe FDA approval of a new screening technology warrants early topic review?  If not, what criteria should be met for a new intervention/strategy not previously considered?

Given the increase in cancer burden expected as a resulted of pandemic-related delays in screening, does HHS agree this could warrant more frequent review of affected cancers?

What level of funding would be necessary to enable the USPSTF to support more frequent and timely review of preventive services?

The current USPSTF review process predominantly utilizes data from randomized clinical control trials, which often exclude older adults and lack critical data on racial and ethnic minorities. Should the USPSTF’s methodologies be adapted to incorporate high quality real-world evidence and longitudinal or observational studies and ensure health equity?  If so, how?  If not, why not?

The USPSTF currently accepts public comments for four weeks on draft research plans, evidence reviews, and recommendation statements, but there is little meaningful dialogue with stakeholders.  To enhance transparency:

Thank you for your attention to our requests. We look forward to receiving your timely response.  We stand ready to assist you in reaching our mutual goal of ensuring Americans have access to essential preventive services.