Medicare Test Coverage Without Any Coverage Articles: An Overview

Recently, clients asked me about coverage rules for two different tests, and while the tests are apparently covered, the rules were hard to find.    The tests are (1) Alzheimer skin cell culture tests from Neurodiagnostics LLC, Maryland, (doing business as SynapsDx, PLA Codes 0206U, 0207U), and (2) the Cernostics test TissueCypher (0108U). Cernostics is based in Pittsburgh and was acquired some months about by Castle Biosciences.  Given the geography, one's first guess is that coverage would be handled by Novitas MAC.

Let me add, this article is based on simple public websites like Google and CMS.gov.  I haven't gotten any deeper information, such as one might get from FOIA requests.

On June 12, I searched the Medicare Coverage Database successively for 0108U, for 0206U, and for 0207U.  Each time the database said "Your search returned zero results."  I also had no hit on the "MCD" for the brand name "TissueCypher."

However, when I entered the same coverage database via Google, there was a hit for 0206U under Novitas molecular billing article A58918, version 11/8/2021, here.

However, that Novitas article seemed to list all the PLA codes, in a very long listing of the PLA code names one after another in sequence, without specific coverage rules related to 0206U, 0207U.  0108U is also listed here with all the other PLA code names, in this version of A58918.

I'm not sure why, although one possible reason is that the 0108U code is a glass slide code, 0206U, 0207U are cell culture codes, so they are not "molecular" or DNA-RNA tests which is the focus of A58918.  The CMS coverage database presumably searches current articles which would explain why a search of our codes of interest today doesn't return Novitas 2022 A58918, but a Google search with a historical archive does (via the replaced, 2021 version of A58918).

Also on June 12, I turned to the Novitas MAC website.  This is because the Cernostics lab is in Pittsburgh, and the SynapsDx/Neurodiagnostics LLC lab is in Maryland, both Novitas states and in Jurisdiction L.  None of the PLA code searches had any hits at Novitas Jurisdiction L (PA/MD), (0108U, 0206U, 0207U).

Regarding 0108U, DEX didn't have a listing for Cernostics, and the Castle lab showed 4 tests, all related to skin lesions (melanoma, etc).  Regarding 206/207U, I didn't see a lab name hit at DEX for either Neurodiagnostics (MD) or Synaps Dx.

How Do We Know the Tests are Covered?

First, the 0108U test, from Cernostics/Castle, is now an ADLT category test.  You have to be covered by Medicare to get classified as an ADLT, so there must be Medicare coverage.  (In fact, if I recall correctly, I saw about 50 paid claims for 0108U in 2020 CMS data).  So the 0108U test is covered.

Turning to the Alzheimer test.  "DiscernTest" is the brand name for the Alzheimer skin cell culture tests 0206U, 0207U.  I had their website up this past week and they stated the tests were covered by Medicare.  Here's a Google clip and a company website screen shot: 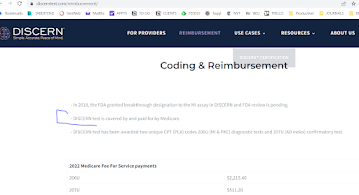 Which patients and for just what circumstances are the Alzheimer test and the Cernostics GI test covered?   Well, someone please point this out to me if this is published, but I didn't find such coverage rules on the various websites using keywords of the codes, which is the most natural way to search Medicare for coded tests.

Rules for Auditors to Apply?

It might be difficult for outside auditors (such as the CERT program, RACs, or ZPICs or OIG) to verify if the tests are paid correctly by Novitas, since it seems difficult to find published rules from Novitas to apply during the audit.

Is Novitas More Friendly to PLA Codes than MolDx Is?

For all the codes in its domain - human DNA/RNA codes - and especially for molecular LDT tests, MolDx states generally apply noncoverage to new PLA codes, and grant coverage based on a substantial amount of technical assessment and review.   So the starting position is "red light."

Novitas Could Start from "Green Light"

Possibly, and I haven't heard this directly from Novitas, they might take the viewpoint that most PLA codes getting very little if any utilization, and leave them on autopay ("green light") unless they have a reason to review them and write an LCD for them.

For example, Novitas might wait and watch utilization; if it stays at zero, no work effort is warranted, and if it exceeds some amount (I'm guessing, 100 or 1000?) they might look further.   (I've definitely known of situations where MACs leave codes on autopay and wait to see "if a fish bites." A MAC can wait to see if there is much activity on the code, before expending work effort to write either positive or negative rules.  So I know that can happen, but I have no knowledge if that's the current Novitas rule for PLA codes).

A short deck on the 0206U test, presented at CMS in June 2020 during the new code pricing process, is online at CMS here.

A third example  arose from a client email the next day. Pacific Edge has a July 2020 press release that its tests CXBladder (0012M, 0013M) are covered by Medicare.  Being in Pennsylvania, they would bill to Novitas, and in fact, the codes were together paid $1.5M by Medicare Part B in CY2020.   However, specific coverage rules were again difficult to find.   The relevant LCD, L35936 , contains historical remarks the tests were not covered (see remarks for R17 and R24, in 2017 and 2018), while a November 2019 meeting transcripts has Novitas stating the tests were not covered (here).   The two codes DO appear in Novitas article A58917, Billing and Coding, Molecular Pathology, but only by listing the two codes in a long list of hundreds of genetic/genomic codes that follow under generic coverage and non-coverage principles (basically, in short, the article states that the following codes are covered when medically necessary and not covered when not medically necessary.)   Turning to the MolDx system, which does not have primary payment authority anyway, the Palmetto MolDx DEX database lists one CXBladder test with a remark it is "not covered by Medicare."

So, given the fact pattern as far as I could find it, CXBladder would also be an example of codes that are covered by Medicare, but without specific or granular, A,B,C, rules for when it is covered and it what circumstances.   Again, one could submit a FOIA request to Novitas for email chains to the company, which might shed more light.