At the New Yorker, the diligence of its fact checking has been legendary for decades (article here).

That sort of fact-checking is dead as a doornail at New York Times nowadays (a literary reference that can itself be fact-checked to page 1 of Dickens' "A Christmas Carol.")

In a New York Times headline on June 22, "New Drug Could Cost the Government as Much as It Spends on NASA," there are a number of leaky places.  It's not a toss-off piece, the authors including one of the NYT main health journalists, Margot Sanger-Katz.    But the citation trail doesn't hold up very well.

Paper Trail for NYT Figures
Today, NYT proposed $6-29B in new costs per year for Aduhelm.   The key reference is here: "Analysts expect that Medicare and its enrollees, who pay a share of their prescription drug costs, will spend $5.8 billion to $29 billion on the drug in a single year."  There are multiple references to "analysts" and the high estimate is hyperlinked to a Kaiser paper here.
The Kaiser webpage is supported by the Arnold Foundation, which is notoriously anti-drug-cost.   Although this is given as the source of the headline high-estimate for the NYT, the Kaiser essay doesn't claim to have any actual data or serious data- and modeling-based projections of costs.  Kaiser simply remarks that "if 1Medicare beneficiaries receive Aduhelm, spending on Aduhelm would exceed $57B in a year."
Well, yes.  If 1M people get a drug at $56K per year, that is $56B.   That's not a projection, it's basic arithmetic.  Kaiser then hyperlinks the 1M patient count as being "on the low end of Biogen's expectations."  Well, they say "it MAY be on the low end of Biogen's expectations."  That's a red flag; the 1M number is either on the low end of Biogen's expectation, or it isn't.
Following the Kaiser hyperlink takes you to an online Biogen deck deck, specifically, dropping yo at page 26.  All that Biogen says on this page is that 1-2M patients have mild dementia, and there may be gradual uptake of patients (prescriptions), and modest revenue in 2021 may ramping up to "multi billion dollar opportunity" over several years.
Did you see $56B?  I didn't.  Did you see that "$56B is at the low end?"  No.   The next page in the Biogen deck doesn't have any dollar expectations either, stating generally that "site infrastructure continues to scale" and "revenue [ramps] beginning in 2022."  Another page, page 30, says that Biogen expects "modest revenue" from Aduhelm in 2022, ramping thereafter.  Nowhere does Biogen say that $56 is "on the low end of its expections."  It doesn't even get near such a statement.
Conclusion
Net net, NYT attributes its high numbers to Kaiser, and Kaiser simply spitballs that 1M patients would be $56B costs, and then Kaiser attributes and hyperlinks the projections to a Biogen deck that says nothing of the sort at all. 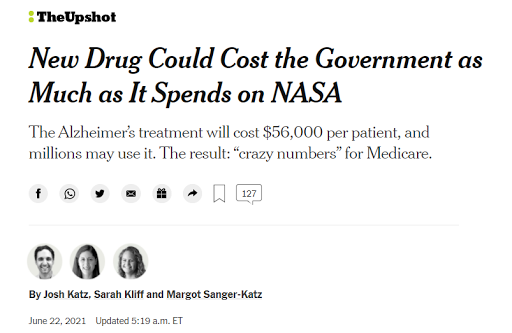