In a landmark decision, on June 7, 2021, FDA approved Biogen's monoclonal drug ADUHELM (aducanumab) for the treatment of Alzheimer's disease.  It's an accelerated approval, which is typically based on a surrogate outcome.  Here, the surrogate biomarker outcome is amyloid load on PET imaging.   This sidesteps the issue of the data for cognitive outcomes in the two pivotal trials, where the data was complex.

Update: On June 22, 2021, FDA released one 80-page PDF and two shorter PDFs about the ADU review process at FDA.  Stories highlighted this at Stat and Reuters, and USNews, but didn't link to the documents.  They're at the FDA home page for ADU, in the lower right, as "FDA Application Review Files."
It was a surprise to me that the labeling didn't refer directly to PET scans for amyloid, because, all the studied patients were beta-amyloid-positive on PET scans.   The indication is simpler and states, "indicated for the treatment of Alzheimer's disease."   There aren't any top-of-label requirements regarding the mildness or severity of disease.
There are requirements for an MRI scan in the past year, and, after beginning the monthly treatment, an MRI scan for safety in the 7th and 12th months.   ADUHELM can cause "amyloid related imaging abnormalities" or ARIA, which on rare occasions, can be severe.
The clinical studies section (#14) does remark that studied patients were amyloid-positive.  Some payers may reach through the top-level indication and look for this criterion pulled from the clinical study populations.
FDA notes that the approval process generated diverse and sometimes strongly held opinions.  (See NYT this past weekend, here.)  FDA notes that ongoing approval (like any accelerated approval; here) will require phase 4 data.
Accelerated approvals have been most common in oncology, where there are numerous available biomarkers (such as objective response aka tumor shrinkage) on which the accelerated approval can pivot.
The stock did not "pop," Biogen has traded in the same band around $260-290 since January 2021.  I wrote this at 930 pacific,  which is 1230 eastern, and I did not then see any change in stock price to speak of.  According to WSJ, price ranged today from $286 start, as high as $468, settling at $395.  The FDA news was out by 8 pacific, 11 eastern, per my emails.  It looks like trading was halted from market open until 1:30 pm ET. 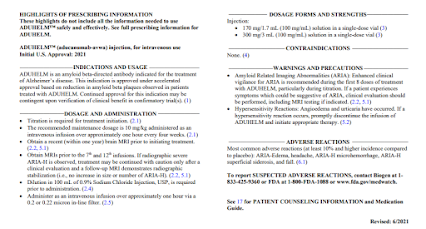