In January, HHS released a proposed regulation that would "deregulate" 83 categories of devices currently reviewed by FDA.   I heard it was released by HHS staff over the objection of the FDA staff.

But its comment period ran 60 days, and according to one news article, many of the comments were against the deregulation.   (For example, devices that are not cleared and approved by FDA may not fall under some reimbursement rules.)

Supporters of the deregulation included Roche and Mayo, both in the context of telepathology or virtual pathology devices.

The withdrawal is a bit harsh, accusing the Trump administration of having issued the January proposed rule with notice or approval of FDA, and being scientifically flawed and unsound.  While they remark that the rule attracted many negative comments, they don't discuss the comments.  Instead, they primarily withdraw the proposal due to finding it flawed and unsound. 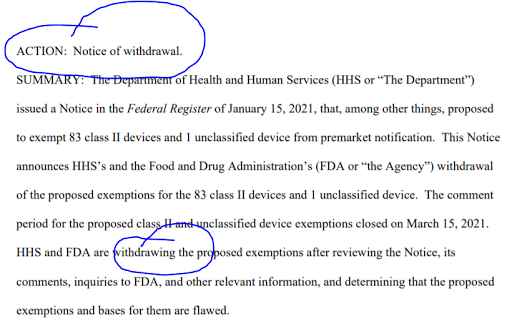 Parallel?
HHS is currently re-reviewing the MCIT proposal, to cover breakthrough devices.  The context is different, in that MCIT was a finished and finalized proposal.   The HHS put it on hold, and reopened it for a 60 day delay opening with an extra 30 day comment period.  That means they had to have significant concerns (to make that work for themselves).  My hunch is, they can or could do whatever they want on May 15 when the 60 day delay is up and they publish a final position on MCIT.  Our hope is that they'll finalize MCIT "again" more or less the way it was finalized the first time.  But if they wanted to say it was "flawed and unsound," well, they're holding the pen, so to speak.