As first noted in Politico here, and presented in Fierce Healthcare here, Biden has picked Liz Fowler to head the Center for Innovation (aka CMMI) at CMS.

The Fierce Healthcare article is worth reading and gives a good background on both Fowler and CMMI.  Fowler work in the 00's for Max Baucus in the Senate, and was an advisor to the Obama administration.  Most recently she's been at both Johnson & Johnson and the Commonwealth Fund.

CMMI originated in Section 1115 of the Affordable Care Act, to run "demo projects."  Due to a quirk in the law, there is no limit on the size and duration of "demo projects" or their scope, as they can alter any aspect of CMS law "for the duration of the demo."   For example, the Trump proposal to up-end existing law about drug pricing for injectable (Part B) drugs, pegging prices instead to European prices, was a to be a decade-long nationwide "demo project" (sic).  That is on hold due to court actions (here) and its CMS webpage says it won't be implemented without new rounds of notice and comment rulemaking (here).  There was actually legislation proposed in early 2020 to reign in CMMI by restricting its demo's to be less than unlimited scope and duration.    (Here, here). 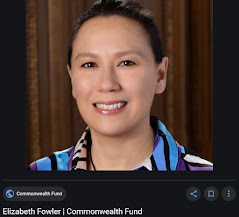 See her December 2020 blog on whether the puzzling, Trump-proposed "Medicare Geographic Care Model" is a good idea - if I understand it correctly, essentially depositing Medicare FFS beneficiaries in some zip codes into capitated-budget, Medicare Advantage plans.  Her blog.  See an article on Geographic Model at the trade journal Dark Report on Feb 12, here.
On March 1, CMS posted a notice on the CMS webpage for Direct Contracting GEO model, that the model was being "reviewed" - here.   Beth Mantz-Steindecker, of Washington Analysis group, noted that this was not unexpected as the complex model has competing stakeholders vying for the final position of the Biden administration.  She wrote that, "patient groups complained about the Geo design’s lack of beneficiary choice and potential confusion among beneficiaries given involvement of insurers and repeatedly asked the Biden administration to re-examine, if not halt, this demo."