The legislation is HR 8845 with the full bill text here.  It would update Social Security Act Section 1861 with a new benefit category, for FDA-approved multi cancer screening tests.  Currently, such tests could only be adopted as Medicare benefits if endorsed by the USPSTF, a process that could take 3-5 years after FDA approval.

I've argued that USPSTF review has largely proved redundant to CMS review (both agencies write the same 40-page report on the same data).

The bill is a little hard to read because it edits different phrases at different points in the statute, moving "and's" and "or's" and adding semicolons (it's like the CRISPR approach to legislative change) but I believe it directly creates coverage for FDA-approved tests.  Existing pricing rules would apply.

See a news op ed by Hudson here.  See an article about the bill here.  See a rapid endorsement by the National Minority Quality Forum here. 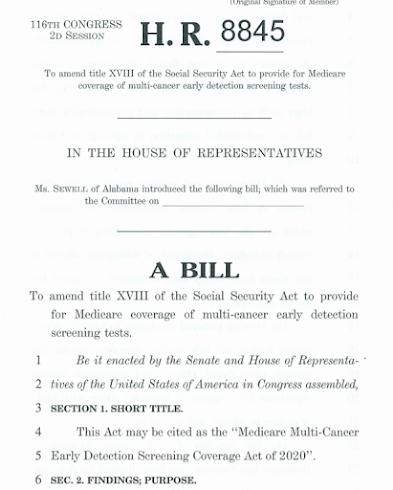