The Epigenomics Epi proColon test was the first liquid biopsy test to receive FDA approval, in April 2016 (here).  The test detects epigenomic DNA changes in the blood that are indicative of the patient having colon cancer, without the need for a fecal matter test or colonoscopy.   (Multiple companies such as Guardant, Exact, and others are now hoping for new tests with similar colon screening indications).

On January 28, 2020, CMS opened an NCD on the Epi proColon test (here).  The expected draft decision date was August 28, which CMS missed (here).

Meanwhile, this year, AHRQ is doing a broad evidence survey of liquid biopsy, presumably at the request of CMS (here).

Today, October 16, CMS released a response to Epigenomic's letter, a dramatic decision which will provide open ended coverage of FDA approved liquid biopsy colon cancer tests (or any blood-based biomarker) on a rolling basis, if they meet the criteria of 74% sensitivity and 90% specificity.  This proposed decision is big news, because it would mean rapid coverage for companies like Guardant and Exact and others with large FDA trials for liquid biopsy CRC screening tests underway.   However, the stated criteria (as a draft decision) leave the Epigenomics test non-covered.

Update:
On October 17, I posted a 15 minute deck and YouTube video about the NCD - here.

Update:
On Monday, October 19, Exact Sciences was up +4%, Guardant Health up +2%, but both within their 5-day trading range.

The back story and links

On October 16, 2020, CMS released a proposed non-coverage decision on the Epi proColon test.

(Note it was almost a year from the request to the opening).

The proposed position, with comment to November 15, is here:

It's an Interesting Decision

The decision is important for several reasons:

CMS likely chose 90%/74% because it's about the statistics achieved by a standard of care, the FIT test (here).  It's the performance expected by FDA for a first-line blood screening test that would substitute for FIT with similar performance.
My reading? This is probably a big win for companies like Guardant if there test meets the 90%/74% rules provided in the NCD.  These are draft guideposts, and could change in the final NCD.
After the November 15 comment period, a final decision is expected by January 14.
I've clipped the full rules below the break.
A Nerd Note - That Really Matters
There is a nuance here - generally, CMS NCDs have authority to cover screening tests AFTER they receive an A/B rating from USPSTF, and go through the additional later NCD process.  For example, a pancreatic cancer screening test.
There is a special clause in Medicare's statue that CMS can produce an NCD directly (without USPSTF) if the test is for screening prostate or colon cancer. 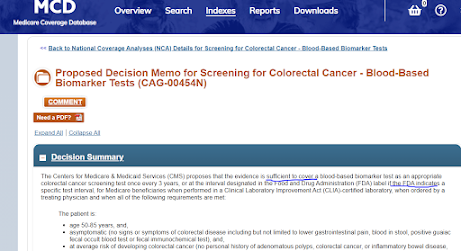 A Signal How to Fix the Medicare Statute
I think this provides a good argument that Congress can drop the requirement that CMS coverage decisions for preventive tests can take place only after USPSTF approval (outside of colon and prostate tests).
Here's why.  CMS has had the authority to make NCDs for preventive colon and prostate tests for twenty years, and has used that authority very cautiously and carefully.   CMS can also make similarly prudent, cautious and careful coverage for possible future FDA approved ovarian, pancreatic, or other tests, without waiting an unknown 2 or 5 or 8 years for such a test to be taken up by an underfunded and very slow USPSTF process.
The Full CMS Criteria, Proposed for Public Comment

The Centers for Medicare & Medicaid Services (CMS) proposes that the evidence is sufficient to cover a blood-based biomarker test as an appropriate colorectal cancer screening test once every 3 years, or at the interval designated in the Food and Drug Administration (FDA) label if the FDA indicates a specific test interval, for Medicare beneficiaries when performed in a Clinical Laboratory Improvement Act (CLIA)-certified laboratory, when ordered by a treating physician and when all of the following requirements are met:

The blood-based biomarker screening test must have all of the following:

The currently available Epi proColon® test does not meet the proposed criteria for an appropriate blood based biomarker CRC screening test.

Based on the evidence at this time, we propose to non-cover the Epi proColon® test.

CMS doesn't appear to provide any guidance on exactly how it would define "professional guideline or consensus statement" beyond stating the terms without further definition.

The entry point was the Epigenomics SEPT9 branded and FDA-approved test.  One source of SEPT9 testing is Hariharan & Jenkins, 2020, a meta-analysis finding average sensitivity of 69% and specificity of 91% with an AUC of .89 and diagnostic odds ratio of 27.   Open access here.  Data was considered only up to May 2018 for this 2020 publication.  One issue with this type of meta-analysis is it may confound different methods of varying sensitivity or accuracy.