You Can Understand It: MolDx and MolDx MACs Journey Toward Liquid Biopsy Coverage (For Both Solid & Heme Cancers)

Regular readers of Genomeweb may have been puzzled by two recent short-format news articles.  One announced that "Palmetto" had finalized coverage of the Natera Signatera test for minimal residual disease detection, in colorectal cancer.   That was September 5.

But Medicare-oriented readers will be aware that Natera bills under LCDs in California (the Noridian MAC), which simultaneously nixed (aka retired) the same LCD.

So here's a new item at Genomeweb on September 25, that MolDx has released a master LCD for MRD in solid cancers (including Signatera in colorectal cancer).   And that the new proposed LCD would consolidate MRD coverage in solid cancers and hematopoietic cancers in one document.

I'll explain it.  Let me just flag the bottom line: Signatera (the test most often mentioned) is paid the same in any MolDx state, but through different routes, which are today's "Discovery in Health Policy."

Also, I've put all the relevant Medicare LCDs, draft LCDs, and articles in one convenient ZIP file in the cloud, here.  [Note, this zip file was updated and corrected at 830 PT 1130 ET].

What are the MOLDX MACs?

28 states operate under MOLDX, a consolidated set of LCDs, articles, and coding edits.  MOLDX is a special subcontract or statement of work for Palmetto GBA LLC, a MAC in South Carolina which is a subsidiary of SC BCBS.   The other MACs - Noridian JE, Noridian JF, WPS J5, WPS J8, CGS J15 - operate MolDx based on joint agreements.  (Here).

They share a common edit file of some 20,000 lines.  Most of the information in the common edit file is public (with email registration) at a website called DEX (TM) Diagnostics Exchange (here).   For example, I tested that the Master Edit File was 5.9MB and matching data files on DEX (TM) were 4.9 MB by my count.   Data fields in the lightly larger M.E.F alone include (a) Z-code identifiers and (b) carrier-set prices, but note that all the carrier-set prices are explicitly releasable under FOIA per Noridian and its public FOIA website instructions and rules here.

The MolDx MACs are shown here by the red "M" symbol: 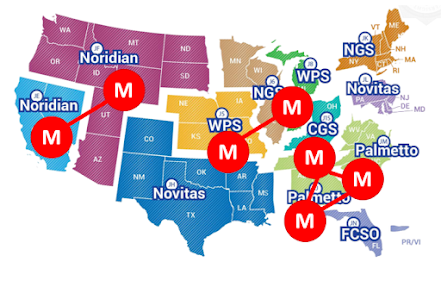 The Saga and Journey of LBX Coverage: ROUND 1

Regarding links, some links at CMS can change, but the ZIP file cited earlier in this blog has a copy of every document that I mention or link.

Around August 2019, all the MolDx MACs released a draft coverage of DL38290 (or equivalent local MAC L-number) which was entitled the "Signatera" LCD for MRD in colorectal cancer.

In Summer 2020, Palmetto and other MACs except Noridian finalized this LCD.  \

Noridian explicitly announced in a web article Noridan was rejecting and NOT finalizing the 2019 proposed Signatera coverage - as an LCD.

The title of the LCD (for MolDx MACs that did finalize the LCD) was changed to delete the word Signatera, but the topic was still MRD in CRC and Signatera was covered by name within the article.

This final LCD was also released with a coding and billing article (A58283) and a Q&A document (A58280) responding to public comments.

So at the end of Round 1, an MRD LCD had been proposed in all MolDx MACs, this LCD had been deleted in Noridian MAC, and it was finalized elsewhere, with a more general title, and with some associated implementation articles.  Whew.

The Umbrella LCD for MRD Liquid Biopsy: September 2020: Round 2

On September 24, 2020, MolDx (meaning the Palmetto MAC) released a new LCD which will likely replace L38290 when the new LCD is finalized.  The new LCD is numbered L38779 (DL = Draft LCD DL38779) and is titled simply, "Minimal Residual Disease Testing for Cancer."

I've included the coverage text in the LCD link just above, the Zip file, and in a separate HTML file here.

BOTH NORIDIAN AND OTHER MOLDX MACS

Now we get to the really fun part.  If you go to the newly redesigned and improved CMS Coverage Database (database here, my article here), today, you'll get identically titled Billing Articles for SIGNATERA at every one of the four MOLDX MACs - WPS, CGS, Palmetto, Noridian.

So you'd probably think the identically titled articles are identical, no?  NO.  It's not that simple!

The harmonized MACs (WPS, Palmetto, CGS) have a short shell of a Coding Article that primarily points its reader to the LCD (the colorectal LCD posted last year and finalized in August).

In contrast, the Noridian article with the same title is longer, because it quotes a full multi-bullet point paragraph of coverage LCD text that Noridian deleted/didn't finalize.   Compare A58448 at Noridian here, with A58330 at CGS here.

After the public comment closes on 11/07, and closes in OTHER MolDx MACs as well, a final LCD could be released in as few as several weeks (requiring among other things a couple-week CMS review cycle for new final LCDs).  But don't count the days.  Final LCDs typically appear after 6 months or more, based on real-world data I've run in the past.

I think of these LCDs as "umbrella" LCDs but note that MolDx refers to them as "Foundational" LCDs.  MolDx strongly wants to shift from its history of "branded" single test LCDs to issuing only "foundational" LCDs.   An approximation - I'm not sure if it's perfectly true but it seems to work as a generalization - is that the Noridian MAC since May 2020 has generally been rejected (ex post facto) any MolDx LCDs with a branded name in the title.   Since Noridian processes 90% of the MolDx MoPath payments as recently as CY2019 (here), something that Noridian won't allow isn't a good thing for MolDx to propose.

One issue raised is that under these non-branded umbrella (foundational) LCDs, future tests will be included (or excluded) on a rolling basis based on internal MolDx reviews - which are potentially faster than public comment period activities but provide less visibility.

The full set of methods and rules for implementation of "foundational LCDs" with internal tech assessments is an issue that will be hammered out in the coming months.

IMPACT OF PATHWAY ON NATERA

Overall, Natera has performed extremely well over the past year, with share price doubling from about $35 to about $70 in twelve months (Yahoo Finance), and market cap reaching $5.9B on September 25.  Natera was up from $65 to $71 on the morning of September 25.

As noted above, Natera in the Noridian MAC has the same coverage under an article (A58448) as it "would have had" in the several other MolDx MACs, under an LCD paired with a shell billing article that pointed to the LCD. 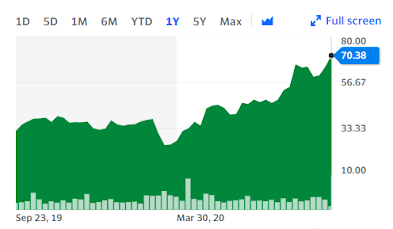