I spent several hours again this Sunday (September 20) on the DEX (TM) and they posted some downtime due to re-branding.  When it came back up, the logo now announces that DEX (TM) is part of Palmetto.  See figure: 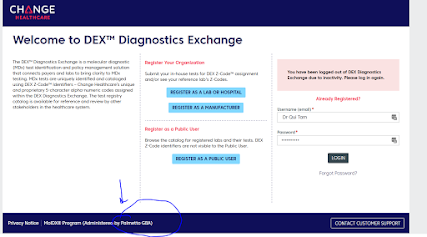 DEX is a goldmine of information (in fact, nearly every field in the MolDx Master Edit File is publicly available on DEX (TM), including additional fields like lab contact persons and addresses not store in the M.E.F.)   As Palmetto notes, "The test registry catalog is available for reference and review by other stakeholders in the healthcare system."   The homepage adds, "The Diagnostics Exchange is an open, online test registry and workflow solution for information and evidence about MDx tests."

I've previously used "DEX" (TM) combined with merging other CMS information sources (and FOIA requests) to identify overpayments.  For example, I first noted anomalous overpayments for EGFR codes to some labs but not others in 2015 (here).  After I notified both CMS and MolDx of the anomaly, the overpayments were corrected and stopped.

Didn't Expect to Find New Overpayments, But I Did

Because of changes in MolDx management, I've assumed that overpayments (even accidental ones) ahd probably stopped, or were de minimus.   But over the years, I've gotten several copies of the MolDx edit file again through FOIA (e.g. here, here.)   (It's easy to get a copy of a previously FOIA'd document; just ask FOIA for the results of a particular FOIA transaction number.)

Fields in MEF but not MolDx edit file include (1) the Z codes (which nobody outside Palmetto has any need for) and (2) carrier prices, which are always available from MACs through FOIA (see MAC FOIA rules here).  Even carrier prices (and MolDx manages about 1000 of them) aren't actually confidential in any sense because CMS releases all payments to providers by CPT code and payment level every year in a huge cloud database for public inspection.  A few other fields include e.g. public LCD numbers.  A few other fields are not important (e.g. last internal review date of the data line).

To my surprise, I started seeing an uptick in overpayments or erroneous payments creeping into the MolDx payments again in the past year, much as they had in 2015.  (I mentioned some of the dubious payment edits in a blog).

Payment errors aren't unexpected; the Edit File has grown form 12,000 lines in 2019 to 20,000 lines in 2020, so nobody could be expected to keep every line correct.  The important thing is when errors creep in they get corrected...

After noting to MolDx management that there were several new overpayment mistakes in the DEX (TM) - for example, codes with fee schedule prices around $1200 mispriced at around $2300 - I received a letter from Palmetto notifying me that such topics were confidential business matters of Palmetto GBA.  As I interpret it, and I'm not an attorney, any readers who have received copies of "Z code" information or "MEF" information are asked to delete them.

I don't want to paraphrase the letter so you can read it >>> here.

FOIA Information Not for Qui Tam -

Readers of this blog and the Medicare trade press probably know that a Palmetto employee settled a qui tam (whistleblower) case against a genetics company for $9M in 2019 (note, with no admission of error by any party.)

You're probably asking yourself: can you file a qui tam case with FOIA evidence of payment errors?   Like the payment errors I find through FOIA requests and report on a rolling basis to MolDx?

I'm not an attorney, but the general answer may be "no," based on a Supreme Court case in 2011 (Schindley v US rel Kirk; however later case law includes some exceptions).   So under Schindley, evidence of a line item $20M overpayment in a FOIA document might be hard to use in qui tam case.  (That's one major reason I've never filed a qui tam case, on my FOIA findings, although I'm also busy doing real work.)

However, under Palmetto's interesting position in a letter of September 18, Master Edit File (which shows quite a few clear, large payment errors) is asserted to be NOT a FOIA-category document, making it seem at least categorically possible it could be used in a whistleblower case , i.e. the SCOTUS Schindley rule would now seem to not apply if the information is not FOIA type.

Back to "DEX" (TM) - A Nationalized Program

Most CMS MoPath spending flows through MolDx edits, about $400M out of every $500M (here).

One of the advantages of using DEX aggressively is competitive advantage.  While a number of LCDs are published on the MolDx (and participating MAC) websites, many coverage decisions are unpublished or hard to find.  However, all of the 14,000 tests on the "DEX" (TM) website have a data field for whether they are covered or not.  For example, if you get a MolDx denial for gene ABC, and you find your competitor has a "Y - Covered" status for gene ABC, you've got a good argument for parity treatment of your lab, too.