It's commonplace in the healthcare, Covid, and lab industries that FDA was far too restrictive on molecular LDT COVID tests in February and March, gradually changing rules and speeding access to Emergency Use Authorization tests.  Feedback against the FDA was bitter.    Then, serology tests began emerging, with few or no FDA controls, and another fiasco occurred.  Serology tests with unknown or frankly inadequate performance exploded in the marketplace.  (See the serology test shoot-on-sight article in NYT, April 24, here.)

When I say it's a commonplace, it's so common it was clearly described in just these terms on HBO's comedy news show, Last Week Tonight, on May 3, 2020.*

On the same day, WSJ published an article that Roche is releasing a new, highly accurate serology test.  (Open access at Quartz, here.)

And just after that WSJ published an article that FDA was making a tight pivot and would require performance controls and EUA on serology tests.

FDA will require serology tests on the market to be 90% sensitive and 95% specific.

Roche expects to manufacture its tests (which run on platforms, not point of care) "in the high double digit millions" by June (e.g. 50M? 75M?).   The Roche test validated for patients tested 14 days after infection, and validated on 6000 patients. Roche states it's 100% accurate at detection while being 99.8% specific (0.2% false positives, stated 0 false negatives).

For additional sources on the FDA serology crackdown -
5.  Biofire snares EUS for Respiratory Panel, Including COVID

Somewhat lost below the Roche news, Biofire announced it has a respiratory viral panel in a version that includes SARS-CoV-2.  See coverage at Genomeweb, here.  The test should be covered under CMS's broad emergency coverage rules for COVID-related testing, released a few days ago (here).

Meanwhile, also May 3, Scott Gottlieb publishes WSJ Op Ed that we need to pivot to antigen tests.  Antigen tests (e.g. point of care laminar flow, like pregnancy tests) may be less accurate but would be a rapid directionally correct test for further actions and testing.

Dr. Deborah Birx, the White House task force coordinator, made this point on Meet the Press April 26, as well. 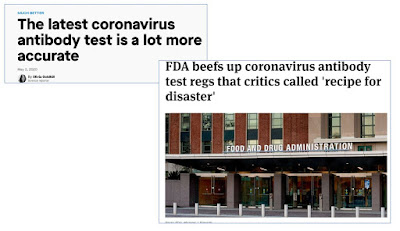 (p. 15)  Focus on commercial kits rather than in house LDT tests.

"At this time, we believe it is most beneficial to focus our EUA review and authorization efforts on tests from commercial manufacturers, which have the potential to be distributed more broadly, rather than laboratory-developed serology tests that are not for diagnostic purposes, are being performed at one laboratory that is CLIA-certified to perform high-complexity testing, and that are validated in-house.  However, if FDA becomes aware of questions or concerns about a laboratory-developed serology test, such as poor performance or misleading statements about the test, FDA will communicate those concerns to the laboratory and provide the laboratory an opportunity to address the questions or concerns.  If the concerns cannot be or have not been addressed in a timely manner, FDA intends to remove the laboratory from the website listing of notifications and may take additional actions as appropriate."
__

* It's also a truism that FDA has been buffeted by criticism it is too rigorous, or too lenient, often at the same time, for generations.