There was a flurry of political news coming out of HHS the past couple weeks, and enough dust has probably settled for a quick lookback and update.

Rick Bright MD, a career government official, has been at the billion-dollar biodefense agency BARDA since 2010, and became its director in 2016 (here).

On April 21, it was announced he was moving to a new position at NIH, in charge of COVID test R&D (contemporary article here).  However, by the next day, April 22, news stories announced that Bright viewed the shift as "retaliation" - here.    Bright released a press release vetted by his several attorneys.

New York Times, Washington Post, and other major sources filled with conflicting quotes from inside HHS, some stating that Bright was a top notch leader, and other sources saying he should have been fired long ago.   One source leaked his 2019 job review, which was rated strongly favorable.

Later, a story came out that HHS administrator Alex Azar and mentioned the shift to the White House, just before it occurred, as a promotion or lateral shift, making the news cycle blow-up seem even bigger and more unexpected.

On May 6, NYT tries to make sense of it all with an article, "Who Is Rick Bright?".   NYT and other sources also post his full 89 page complaint - here (redacted).

CNN states Bright will be testifying before the House on May 14.  Allegations include contracts "steered to cronies." 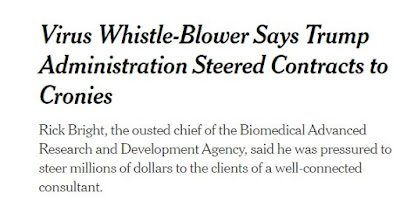 Christine Grimm, Principal Deputy Inspector General - Stays or Leaves?
The HHS OIG was under the leadership of Dan Levinson for a long time, 15 years.   He announced in April 2019 he was resigning, effective May 31, 2019 (here)

On May 2, 2020, President Trump announced he was proposing Jason Weida, an assistant US attorney in Boston, to be the next permanent Inspector General at HHS (here).   He is expected to replace Christi Grimm, who has been both principal deputy director of HHS/OIG and also the Acting Inspector General since Chiedi's retirement in December - here.

Some news sources (like NYT on May 1, here) reported the news that President Trump wanted Grimm "fired," not merely returned to her full time deputy roll.  On May 2, an HHS spokeswoman told CNN that Grimm "will continue to serve as" deputy IG.

The OIG Report on Hospital Shortages - Incendiary or Routine?

The brouhaha over Grimm centered around a report released by OIG on Friday, April 3, and mostly covered in news stories on Monday, April 6.   The report surveyed a selection of hospitals for a week in late March and rapidly summarized data that protective equipment was in short supply.   See the report here, and news stories at the time here and here.

I said at the time that this was in fact a routine report, and OIG was provided it to shore up activities of other agencies.  For example, at about the same time, HHS released its first massive "interim final rulemaking" under its emergency powers at SSA 1135.

By using the OIG staff to push out a stat report on shortages in only a few days, HHS officials could thus cite this same federal report about shortages (justifying emergency rulemaking) rather than citing anecdotal information or even worse, god forbid, citing NYT or CNN as sources for information about supply shortages.  Much better to footnote a federal report.


OIG or GAO or other federal bodies routinely do reports that shore up administrative actions that are about to be taken.   For example, in 2013, OIG released a report that large commercial labs get much lower payments from commercial payers than the Medicare lab fee schedule, and this supported legislation a few months later lowering Medicare lab fee schedules (PAMA Section 216).   Similarly, OIG/GAO reports on overpayments on DME then promptly were used to support legislation on DME competitive bidding.

These are just quick recent examples; the concept goes back to the 1870s and 1880s.   When Nixon launched the legislation for "War on Cancer" in 1973, it followed several years of white papers, reports, and hearings designed to lead to legislation for a war on cancer.   So to me, the Grimm report was actually routine, part of the wheels and cogs turning normally, and not "incendiary" or the work of a renegade.

I would say I was surprised, except you really can't be surprised, to see a NYT report much later, on May 1, that President Trump now wanted Grimm fired (here; see quotations at bottom*).  Grimm might be fired; or she might find it is a good time to move to her own version of DLA Piper, as Chiedi did; but I suspect the OIG supply shortage report was actually part of a coordinated effort to support federal emergency actions occurring or about to occur, and not a secret wingnut activity undertaken as a rogue action. 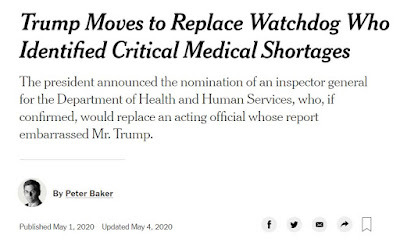 “It’s just wrong,” the president said when asked about the report on April 6. “Did I hear the word ‘inspector general’? Really? It’s wrong. And they’ll talk to you about it. It’s wrong.”

When the reporter did not know, Mr. Trump insisted. “Well, find me his name,” the president said. “Let me know.” He expressed no interest in the report’s findings except to categorically reject them sight unseen.

After learning that Ms. Grimm had worked during President Barack Obama’s administration, Mr. Trump asserted that the report was politically biased. In fact, Ms. Grimm is not a political appointee but a career official who began working in the inspector general office late in President Bill Clinton’s administration and served under President George W. Bush as well as Mr. Obama.

She took over the office in an acting capacity when the previous inspector general stepped down.

Mr. Trump was undaunted and attacked her on Twitter.

“Why didn’t the I.G., who spent 8 years with the Obama Administration (Did she Report on the failed H1N1 Swine Flu debacle where 17,000 people died?), want to talk to the Admirals, Generals, V.P. [Pence] & others in charge, before doing her report.”