In a July 15, 2019, article, the open access site Dark Daily, related to trade journal Dark Report, highlights the role of pathologist Adam Clapper in bringing down the Theranos juggernaut several years ago.

The pathologist, who at the time ran Pathology Blawg, was skeptical of a favorable New Yorker article published in December 2014. 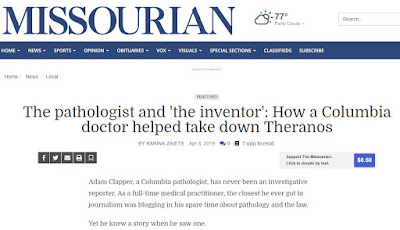 Beginning at the same time, in December 2014, this blog Discoveries began a single multi hundred link blog on Theranos.  That blog page was continuously updated for several years to track the rise and fall of the Theranos story - and it's still online here.