A 3-judge panel in Washington has revived the ACLA's lawsuit against CMS and PAMA regulations, remanding the case back to the lower court for further decisions.

In October 2018, the case was decided negatively in federal court on the grounds that while ACLA had standing as a litigant, PAMA law shielded CMS price setting from judicial review.  Here, here.

Oral arguments on appeal were heard in April 2019 (here, here).    In parallel, a few weeks ago, a bill to delay and revamp the PAMA process was introduced in Congress (here).

On July 31, Appeals Court ruled that whenever a Congressional bar to judicial review is encountered, it should be interpreted as narrowly as possible.   While the court acknowledged that (as the lower court had done) the judicial review prohibition written into PAMA might be interpreted to apply both to the PAMA rulemaking process and the PAMA pricing process, this would not be the narrowest interpretation.


My sense reading the case (as a non-attorney) was that the Appeals Court was also skeptical of applying the bar to judicial review to notice-and-comment rulemaking, because then, a mischievous agency could run roughshod over notice and comment rulemaking, making all kinds of mistakes, and there would be no recourse to court.

Net-net, the Appeals Court decided that the notice-and-rulemaking phase of PAMA pricing was separable from the actual triennial pricing process, and that the former could be judicially reviewed, although Congress had barred the latter from review.

I've put the full 22 page opinion - which has a very clear overview of PAMA, the issues, and some snappy turns of phrase - in the cloud here.   Written by Judge Cornelia Pillard.  Judge notes that since the case was originally filed in December 2017 (here), CMS has considerably expanded the range of hospital reporting, which was the main point of contention originally.  However, the impact of that is irrelevant to the appellate decision, which simply sends the case back to lower court for the consideration of the facts that was avoided the first time due to the original position on judicial review. 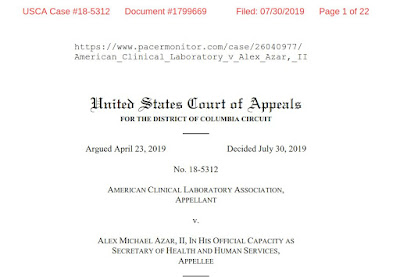