Adaptive Biotechnologies announced its pending IPO a couple weeks ago, and yesterday announced an expected opening price of $20, planning to raise $300M.

After the opening bell June 27, share priced spiked as high as $40.

For a CNBC video today with CEO Chad Robins, here.  For today's IPO trade news, here and here.  CNBC ran a good story in the afternoon which discusses Microsoft's collaboration with Adaptive, here.  Per CNBC, the value of Microsoft's direct investment quadrupled in 18 months.

The Seattle Times had said the $20 IPO would value the company at $2.5B; at double the share price, it suggests the valuation is $5B.

The May 30 S-1 is here; I haven't checked if a slightly updated one exists.

In an open-access article by Cristea/Cahan/Ioannidis in January 2019, many life sci companies with billion-dollar valuations (unicorns) were criticized for thin publication histories, but Adaptive's publication roster was extensive and in a class of its own - here.  Adaptive had 89 publications. 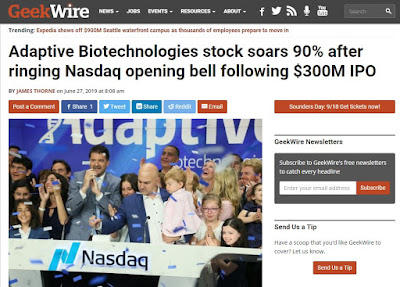