Many in the lab industry are familiar with the Theranos saga from numerous news articles and from the 2018 non fiction best seller BAD BLOOD.   Bad Blood was written by WSJ journalist John Carreyou.  Here.

Newly minted: Theranos, the podcast mini-series. It's called THE DROPOUT.   Hosted by Rebecca Jarvis and produced by ABC, the podcast series runs six episodes and and about 4 hours at 45 min per episode.  Find it on iTunes and other podcast aggregaters.  Website here. 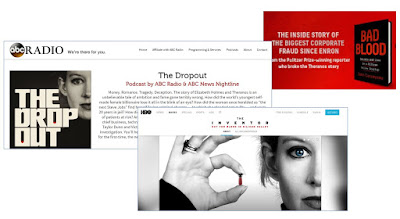 For an early review of the documentary, March 8, MedCity, here.

I just learned that there will ALSO be a Theranos documentary on ABC, 20/20, on Friday, March 15, 2019.   This TV documentary builds on the Podcast documentary "DropOut."   Link here.

Vanity Fair
See a February 2020 update on the last days, and the hereafter, of Theranos, at Vanity Fair, by Nick Bilton (limited open access), here.

Movie?
Someday: I've heard little about a rumored biopic movie with Jennifer Lawrence, but I haven't seen that it's canceled either.  The Hollywood rumor mill now pegs it for 2020.  Here.

My Chronological Archive of 100's of Web Articles
My 24-month month running archive of Theranos web articles, some dating back to 2004/2006, here.  Most of the links are 2014-2016, spanning the media-fueled rise and fall.

Unrelated to Theranos, but another new example of the long-form miniseries podcast as a type of journalism, see Bag Man, about Nixon's criminal vice president Spiro Agnew, at NBC here.  (At this website, also available as transcripts of the podcasts).