Update.
January 2, 2019, article in SLATE reviews interim events and opinions, here.  Link to 30 page ruling by Judge O'Connor "staying" the impact of his decision but affirming his confidence in his decision, here.  (In addition to staying the impact, he deals at length with other considerations like assertions the plaintiffs have no standing.)  He argues that a stay is appropriate, although, at the same time, he sees no hint of feasible grounds under which his decision could be reversed during appeal (78 footnotes).

Every news website today leads with news that "Obamacare has been struck down."   Rarely, an article provides a link to the actual 55 page ruling.

Washington Post notes that the ruling was not unexpected, as the judge was highly critical of Democratic state attorneys-general pro-Obamacare arguments in an earlier hearing (cited here).  Not helping would be the Administration's determination in June not to defend the ACA against this court action to terminate it.  Atlantic says that Chief Justice Roberts set up the chutes-n-ladders legal game that is now playing out and didn't need to, here.   Bloomberg asserts it's lose-lose for GOP, here.  Atlantic adds that "plaintiffs have no standing," here.  Slate collates legal pundits, mostly negative, here.

Fans are out there, too.  Author at The Federalist likes the O'Connor ruling a lot, here.  For a thorough and readable 39-page, 292-footnote, scholarly review of the case leading up to moment before Judge O'Connor's ruling, see Blackman, in press, here [click Download This Paper.]

Recall that several years ago, Supreme Court ruled that Obamacare was constitutional under Congress's taxation authority.  A mandatory tax element (for having no insurance) was resulting discontinued by the Tax Cuts and Jobs Act of 2017.   The theory here is that with a razor thin majority in the Senate, the Congress couldn't repeal Obamacare, but they could repeal one sliver of it, which might lead the rest to topple via a subsequent judicial ruling.   (Example of Jenga game, here.) Judge sees himself as one domino in a row of dominos, writing "the 2010 Congress enacted the ACA, the 2017 Congress sawed off the last leg it stood on (p.54)."

Nothing is Severable:
ACA as Consumer Insurance vs ACA for Medicaid & for CMMI

WaPo writes that the judge concluded that the insurance requirement was "essential to and inseparable from the remainder of the ACA."   But the same WaPo articles states that by contrast, in June, US DOJ asserted that "many other parts of the law could be considered legally distinct and thus can continue."

Judge O'Connor does not parse the diverse sections of the ACA, but writes simply that "the Court adheres to Congress's textually expressed intent and binding Supreme Court precedent to find the Individual Mandate is inseparable from [all] the ACA's remaining provisions."

The judge continues that: "the ACA includes many other integral regulations," but cites by name only those obviously related to conventional insurance, e.g. children remaining on parents' plans to age 26.  He simply describes the ACA's "hundreds of minor provisions [in] 900 plus pages of legislative text" as "complement[ing] the above mentioned major provisions."

After citing an 1879 case about the limits of judicial construction (e.g. to limit a part of a statute), and stating that "federal courts lack a roving license to flip through the US Code with a red pencil," judge concludes that ACA, Public Law 111-148, as a whole, is invalid. 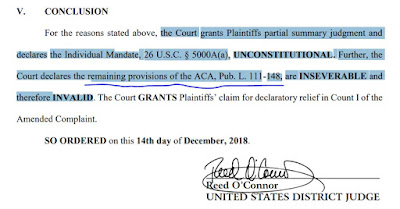 Judge acknowledges that defendants do make arguments that, "by eliminating the shared-responsibility payment [AND] leaving the rest of ACA intact, Court should infer that Congress intended to preserve the balance of the ACA." (see page 52-54).

In addition to citing an 1879 case about the limits of judicial construction [court not competent to pick and choose among parts of ACA], see lengthy footnote 34 against arguments in favor of more severability within the ruling.  Argues to 1928 case, Frost.  Quotation that "Frost's bite is not available [here.]"  Adds:  Frost is not a license for courts to reach out and hold unchallenged constitutional acts unconstitutional as a remedial safety valve...Because of how Texas structured its challenge, the district court [e.g. the writing judge]  is presented with a narrower menu of options with respect to severability. No one—not the Plaintiffs, not the Intervenors—has challenged the constitutionality of the TCJA."

And:
"Federal courts lack a roving license to flip through the U.S. Code with a red pencil to void one statute in order to save another."

I wrote above that the Congressional tax action of 2017 foreseeably led to the 2018 court ruling.  The judge acknowledges that chain of events, as written above.  Judge notes that Congress did not strike down the Individual Mandate but rather the tax based on the individual mandate.  But the Individual Mandate, solo, had been ruled unconstitutional [not valid under Commerce Clause], at which point we only still had an ACA since it was saved by the existence of the tax, since Congress has tax authority.  But now, Congress has deleted the tax-text.

Judge doubles down on the message.  Congress knew it was unleashing a game of falling dominos:

Although I don't know if he knew it, Judge's citation to Blackman (vide infra) would include a SCPTUS quotation from Fausto (1987):  "Congress is presumed to act in full awareness of existing judicial interpretations."

Inseparable?  Dependent on Tax Authority?  We Can Do That!

If you take for granted Judge O'Connor's position that the ACA, all 1000 pages of it, are inseparable, AND that it would depend on tax, not commerce, authority, there's lots of that.  It's got Medicaid in it, driven by taxes, so you've got legal Medicaid, legal taxes, and you've already said the other 999 pages are inseparable.  There's a tax on the medical device industry - that's one page of 1000, but we've stipulated inseparability.  There's also a tax on health insurance, which funds PCORI, the patient centered research agency.

Supreme Court agrees with its prior position and O'Connor's ruling, that the now-deleted individual tax clause was pivotal to the commercial health insurance parts of ACA.  But SCOTUS determines that other parts are severable, and remands back to Judge O'Connor to figure out which pages of the 1000 pages are separable, and which not.

Individual Tax and Hall of Mirrors

Ever since NFIB v Sebelius, there's been a hall-of-mirrors game.  That ruling - from a sharply divided Supreme Court - ruled that Congress doesn't have authority (under the commerce clause) to force people to buy insurance (since per that decision, it can't regulate non-purchasing as "commerce"), but it does have authority (like it or not) to put a tax on people who don't buy insurance, since its tax authority is nearly unlimited.   What if you put a tax of $1 on everybody, then refund the $1 to everyone who buys insurance?   Another angle is that without the individual mandate, the law may not make a lot of sense (due to insurance death spirals, etc) but conservatives would argue it's not the job of the courts to decide whether a law passed by legislators "makes sense" or not.

In the final footnote, Judge cites Blackman, "Undone: The New Constitutional Challenge to Obamacare."  It's in press in Texas Law Review, while the PDF can be downloaded open access here (39pp).  This is essentially a law-professor-level review (with 298 footnotes) of where ACA stood coming into 2018 and at the moment before Judge's decision.  Blackman cites Fausto, 1987, that "Congress is presumed to act in full awareness of existing judicial interpretations." (his fn 272).  Blackman, like O'Connor, favors an inseverable approach to striking down ACA, but like O'Connor, gives no moment of attention to its diverse non-insurance sections such as PCORI and CMMI and Biosimilars.