Abernethy, once known for her work on the evidence supporting off-label compendia for oncology (here), is currently Chief Medical Officer for Flatiron Health, which was absorbed into Roche earlier in 2018.

Abernethy sits on boards of the Personalized Medicine Coalition, Athenahealth, and CareDx.

“She’s a highly regarded thought leader who has held numerous positions of leadership in her fields of interest and distinguished herself for her intellect, her passion for patient care and science, and her collegiality,” Scott Gottlieb, the FDA Commissioner, wrote in a memo to FDA staff announcing Abernethy’s appointment.

Robert Califf, the previous FDA commissioner and a mentor of Abernethy’s, echoed Gottlieb’s praise. “In my wildest dreams, I wouldn’t have imagined Scott could come up with somebody this highly qualified,” Califf said. “So I think it’s really good for the country. I’m really excited about it.”

Abernethy says that the role was too meaningful to pass up. “I had always thought I would go into government service, and I have always believed that one of the ways you make change is through policy and regulation,” she says. She hopes to work on speeding up the collection of data that can be used in clinical trials—“Historically, patient-defined concerns were always secondary, and the question is: How do you make the needs of the patient the obvious thing that we’re working on?” she says. 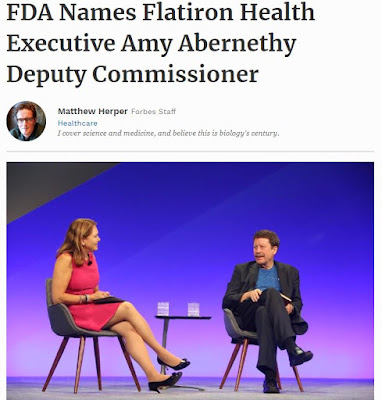