There aren't surprises; CMS is implemented PAMA cuts released in November 2017 for CY2019, and CMS is releasing gapfill pricing or new code crosswalk decisions that had been posted in recent weeks.*

New codes and pricing become effective January 1 related to BRCA testing, as shown in this table:

18 codes are under the gapfill process. 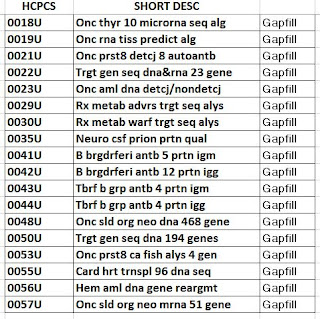 The CLFS has 2,015 lines, although some lines are duplicates with and without a QW CLIA waiver suffix (which doesn't change pricing, but allows the code to be paid outside a CLIA lab).   If you ordered every test once, it would cost $232,665.57.

After one of the longest journeys I have followed, and several years of changing prices at CMS, and a gapfill year, Sep9 landed at $192 (81327).  This represents the FDA-approved Epi proColon test.

* I haven't manually checked if any proposed final gapfill prices from October 2018 have altered.