Last Thursday, December 6, FDA released a rather quirky statement on its intention to encourage innovative diagnostics while regulating LDTs.  LDTs would be regulated by new methods, risk-based, and including "pre-certification" aka self-certification.   The statement, released in a series called "FDA Voices," opened with a statement by Commissioner Scott Gottlieb, then a statement by CDRH leader Jeff Shuren, then a statement from the legal team, Lauren Silvis, focusing on hazards and risks of unregulated LDTs (bad cop?).

December 7, as publicized by Genomeweb here, the Hill has released a new 200-page version of legislation that would greatly reform the FDA's approach to clinical diagnostic tests.


Can such an act possibly pass in this section?  You can assume not (a couple legislative days left.)  Sen. Hatch (retiring) regrets he will not be around, in 2019, to see the possible future action on the bill.

Stay tuned for CY2019 and a new Congress. 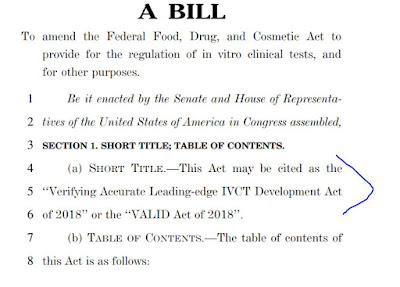