MolDx Program Drops "Coverage with Data Development" From Its Handbook

Coverage with Evidence Development (CED) is a form of gated entry for new technologies into the healthcare payment system.*   The program is most commonly associated with Medicare and, at least until recently, has been uncommon with commercial payers.   Medicare has formal rules for this process and grants national CED through the NCD process.   See the CMS home page for the process here, which lists subpages for 23 topics in CED.

Since early in its program, MolDx has offered "Coverage with Data Development" or CDD.   For a period, all LCDs that included this feature had the term in their titles.  See a 2015 slide describing four prostate test CDD programs here. 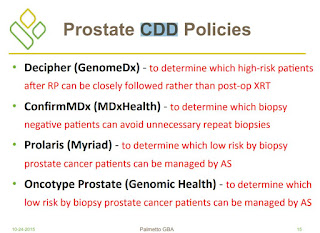 For a more recent example, see the Fall 2017 LCD for the Allosure transplant donor DNA test, which lists expected ongoing evidence rules, and these foot closely to a ClinicalTrial.gov registry.**

However, over the last several years, CMS central has taken the position that "MACs can't do CED, it can only be done via an NCD,"*** and the differences between CED and CDD were sometimes subtle.

In the past year, we sometimes heard the MolDx term "COA," an LCD with coverage granted on the condition of specified ongoing evidence generation and assessment - coverage with ongoing assessment.

MolDx Publication M00106 is its "MolDx Coverage, Coding, and Pricing Standards and Requirements," currently a 15-page PDF file....here.  Version 24, July 27, removed the term "CDD" from the possible outcomes of its LCD review process (other outcomes are coverage, non-coverage).

One often thinks of coverage with evidence development as either the NCD route (as shown above) or the MolDx CDD route (no longer exists).   However, a third path is having an Investigational Device Exemption from FDA for the diagnostic test, using it in a clinical trial that meets Category B Clinical Trial criteria.  CMS reviews the protocol nationally and then grants coverage for devices (tests) used in the trial.   CMS IDE page here. 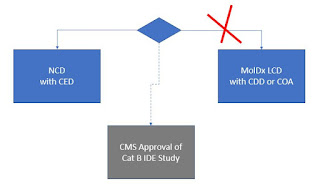 *  I've assembled some articles suggesting that the first equivalent of staged entry and CED was actual 1980 rulemaking for heart transplants; here.

*** The origin of CED is 1862(a)(1)(E) which provides CMS the authority to fund research necessary for the purposes of AHRQ (e.g. for the purpose of improving healthcare in the U.S.).  I am not an attorney, but from the relevant CED Medicare statute 1862(a), I can't tell why CED would necessarily be restricted only to CMS central office and not to LCDs.  Many adjacent bulleted items here in this area of statute, before and after (1)(E), are defined in whole or in part by MACs.
____