On August 9, 2018, Foundation Medicine (FMI) filed its SEC 10-Q [MAY NOT WORK; SEE CLOUD COPY INFRA] for the quarter ending June 30. And on August 10, it filed its 15-12B: its termination of SEC registration and filing duties.

So, with FMI's acquisition into Roche, the August SEC document is the last view into its legacy of New England MAC policies, North Carolina/Palmetto policies, and journey through an NCD to ADLT status.

I've stored a cloud copy of the 99-page 10-Q document here, with some highlighting.  Below, I use paginated page numbers rather than PDF page numbers (which are 1 higher).

What follows is my bullet-point notes harvested from the long document.  Some tidbits of policy you may need to know as background are at bottom [*].   For a Genomeweb discussion of recent conference presentations by CMS, FMI, Sloan-Kettering and others, August 24, see here. 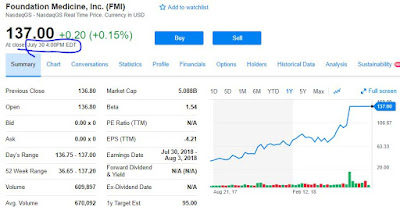 From page 52 forward, the SEC report has a very long presentation regarding FMI's supplies & service agreement with Illumina.
___

[*]
It appears that FMI bills its FMI F1 CDx test from its Cambridge, MA [New England] lab, to one MAC, and its F1 non FDA tests via its North Carolina lab to another MAC.
The MolDx MAC has a longstanding LCD covering comprehensive genomic profiling (CGP; the F1 test) for lung cancer.  For over 18 months, proposed policies for coverage in ovarian, melanoma, colon, have existed but are not finalized.
The March 2018 NCD for NGS testing in advanced cancer covers NGS tests if they are FDA approved, if they have at least one combination diagnostic, and if they have an indication in the specific patient's cancer.   To my reading, this covers the F1 CDx test in lung cancer, because there is an on-label indication in lung cancer (ALK testing in lung cancer).  But the NCD text also covers F1 CDx test in any solid cancer, because the FDA provided an additional, more generic FDA indication for use as "genomic profiling" for use by physicians in solid tumors.

[**]
The discussion of an estimated portfolio of value in payer invoices submitted sounds like tranches of commercial debt; some AAA bonds, some junk bonds.
[***]
Codes 81445 and 81455 differ in number of genes (being 5-50, and 51+), but are identical in other respects (e.g. classes of deletions).

While we don't know the distribution of price points paid by those cryptic payers to FMI, we do not the price point distribution for codes 81445 and 81455 in CY2016, from primary PAMA data.  The prices are highly non Guassian.  Bar height shows the "N" of payments to US labs for these codes at various price points from $100 or less, to >$5000.  Data is from 1H2016. 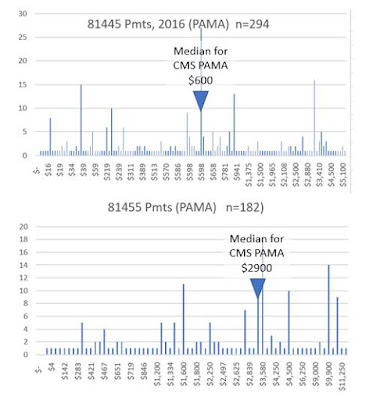