On April 25, the GAO released a report on the progress and results of 37 CMMI models.   GAO's bottom line was that of 37 plot projects, just 6 were shown to have successfully reduced spending (while maintaining or improving quality). Even fewer (2) were expanded so far.  $5.6B has been spent since the creation of CMMI by the Affordable Care Act in 2010.

This blog wrote about the GAO report on CMMI Medicaid pilots in February 2018 here.   (GAO found lack of rigor in reporting.) 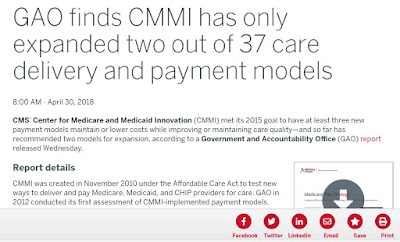 Reboot & Comment
CMS/CMMI launched a "pause and reboot" project in October 2017; and a few weeks ago in April 2018 released public comments and some ideas for moving forward such as primary care direct contracting (here).

CMMI Request for Information on Direct Contracting Primary Care
Find more info about this here.  Comments accepted til May 25.

$800M Budget Cut
In May 2018, OMB proposes to cut $800M from the CMMI budget. here.  CMMI has had a ten year budget to 2019, with several billion unspent and without a spending plan, so this is more a clawback of stored funds than a cutback in programming.

Rigor at CMMI? Or Not?A May 2018 article in NEJM decries the shift from randomized trials to voluntary demos at CMMI, here.   I would add that since CMMI must by statute demonstrate its programs save money and raise quality, if they are not rigorous, CMMI may be shooting itself in the foot at evaluation time.

Slow Start at Diabetes Prevention Program
This is the CMMI funded pilot-to-expansion program.  Stumbling, per an article in Kaiser Health News, April 2018.  Here.  Update in May, here.

OMB Criticizes Lack of Progress and Impact at CMMI

In June 2018, OMB head Joseph Grogan put CMMI in his crosshairs for a round of criticisms.  These are summarized in an August 2018 blog by Thomas Sullivan at the Policy & Medicine blog.  See multiple links - here.

For a March 2017 JAMA article on value based purchasing ("Time for a reboot?") by Jha, here.

For a May 2018 editorial on measuring bundled payment programs in Annals of Internal Medicine by Provonost at Johns Hopkins, see here (trade press here.)    For a NEJM article on the poor performance of "performance measures," MacLean et al., here.
___