Will New York City be Silicon Valley East?   One feature of digital health, and to some degree next gene sequencing, is the relatively light required footprint and space.   Thus, significant companies can locate in places like New York and San Francisco and central urban Cambridge, MA (the latter being the home base of Foundation Medicine).

New York City has released a 2018 report on venture capital investments in healthcare industries.  Most are on the artificial intelligence/innovative data management side or predictive analytics.   Report here, 16 pp. 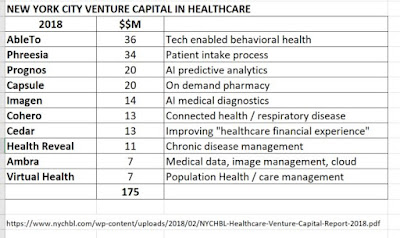 Digital health can move quickly and at scale.  Roche just announced its $1.9B acquisition of Flatiron, while COTA (cancer health analytics) raised a new $40M, which would top out the NYC list above.  West coast in the last few months, Illumina announced a $230M venture fund and 23andMe raised $250M.   In the genomics digital space, DNANexus very recently pulled in a new $58M which would also top out the NYC list above.

There are also fizzles in Dhealth.  News reports that Nokia may be backing out of digital health after several hundred-million dollar investments (here).  For a detailed review of trends in digital health in 2018, see a 2 part series at MobiHealthNews here and here.  See also a nice article on "5 trends that will matter," here.