ACLA sued CMS over PAMA rules and changes in the lab fee schedule.   A link to the PDF lawsuit is here.

The corresponding press article at Reuters is here.   The ACLA press release is here.  (Concurrently, AMA released an article that PAMA will be very adverse to physician office lab testing, here.)

The case has been written by Mark Polston of King & Spalding LLP in Washington. 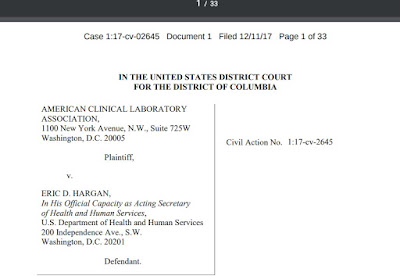 Congress required CMS to collect private payment payer rates from laboratories which receive "the majority of its revenues under the Medicare program from the CLFS or the PFS."  CMS also interpreted that it had authority to set rational size limits for reporting laboratories (e.g. excluding a physician office lab that reporting 25 urinalysis to CMS a year).

To my eye as a layman, much of ACLA's argument is convincing.   I do not entirely understand, however, how CMS would have or could have calculated "majority of revenues of a laboratory" for labs that are fully embedded inside a hospital and thus have balance sheets and revenues merged with the hospital, especially for Part A.  For example, Congress could easily have said, any entity billing CMS for more than $12,500 of CLFS services must report its private payer lab payments.   By inserting the rule about "majority of revenues" Congress left a zone of accounting quicksand for anyone trying to determine the percentage of revenues of an embedded, hospital lab under the hospital NPI and hospital TIN.  And almost all hospital labs are embedded this way; they were fiscally embedded and merged under the hospital NPI and TIN before CMS faced the problem in the PAMA rules.

CMS bundles the payments for all DRG inpatients and the vast majority of the lab test payments or allocated budget for hospital outpatients as well.   So none of those CMS payments are from "CLFS or PFS."   CMS probably felt that figuring out the "majority of payments rule" for a lab administratively embedded within a hospital would be very difficult (some mix of CMS payments - completely unspecified and unpriced - for inpatients and outpatients, and then also, CLFS or PFS revenue for reference lab activities.)   Perhaps throwing out the baby with the bathwater, CMS ruled that applicable reporting labs had to be those that were, already, receiving or reporting all CMS payments under their own NPI.   This left a set of ... almost nobody.    However, it's easy for CMS to say exactly what proportion of payments such labs get from CLFS if it's based on an NPI: CMS can just look up its own computer NPI records.  (Actually, it might not be that easy, because the lab might have its own NPI, bill CMS for reference lab tests, yet the "same lab" also get some revenue from a hospital cost center through internal financial transfers for running some tests on inpatients, AKA Medicare origin revenue).

A treat for close readers of the lawsuit will be a couple references to a "HIDDEN TAB" in the public CMS spreadsheet.  (!).   At least in early versions of the public spreadsheet, of final PAMA values, you can click on Cells, Visibility, Unhide Sheets, and a sheet or tab pops up called "Hidden Data."  I don't understand the data, but it has to do with full data versus data with "No Labcorp/Quest."