New online at Journal of Molecular Diagnostics (included with Association for Molecular Pathology membership).   Hsiao, Mansukhani, Carter, and Sireci of Columbia University have written an in depth study of actual changes in reimbursement (and coverage) in their molecular laboratory as policy, coding, and fee schedules have rapidly evolved in recent years.

The in press manuscript is online here.  Don't miss the interesting graphics from page 20 forward. 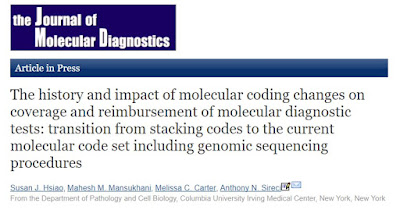 Prior to 2013, the TCR beta test was coded using “stacked” current procedural terminology codes and subsequently transitioned to a tier 1 code. CCCP was coded using a combination of tier 1 and 2 codes until 2015, when a new Genomic Sequencing Procedure code was adopted. A decrease in reimbursement of 61% was observed for the TCR beta test upon moving from stacking to tier 1 codes. No initial increase in total rejection rate was observed but a subsequent increase in rejection rates in 2015 and 2016 was noted.

The CCCP test showed a similar decrease (48%) in reimbursement following the adoption of the new genomic sequencing procedure code and was accompanied by a sharp increase in rejection rates both on implementation of the new code and over time.

Changes in coding can result in substantial decreases in reimbursement. This may be a barrier to patient access due to the high cost of molecular diagnostics. Revisions to the molecular code set will continue. These findings help laboratories and manufacturers prepare for the financial impact and advocate appropriately.