On November 30, 2017, the National Academy of Medicine released a free 200 page report on the problem of excessive drug prices.

Drug costs have been a concern for generations; Senator Kefauver of Tennessee began hearings on drug price-fixing when he was told (in 1955!) that two different antibiotics at his corner pharmacy both cost exactly $3.    (This vendetta eventually transformed and morphed into the Kefauver FDA amendments of 1963).

The NAM press release is here and the PDF report is available here.  It comes with a one hour panel media presentation as archived video, here.

Coverage at:
This National Academies project is different than a mid November GAO report on drug profits compared to R&D spending; see the 70 page GAO report here and the Endpoints blog on it here. 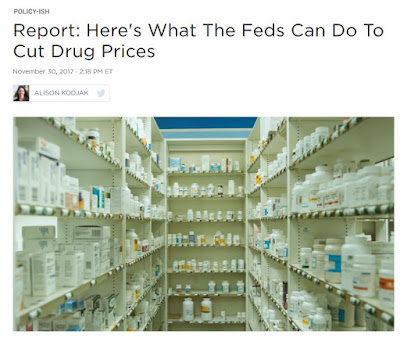 For Bloomberg December as "Diabetes as the Messiest Drug Market," here.   Also from Bloomberg in December, "FDA Targets Insulin" for excessive prices, here.  Fpr a summer article at Bloomberg on "Crazy Math Behind Drug Prices," here.