The guidances include two in draft, one final, and follow naturally from recent initiatives such as the "Digital Health Innovation Action Plan" *8pp) of the FDA.   Guidances today include: 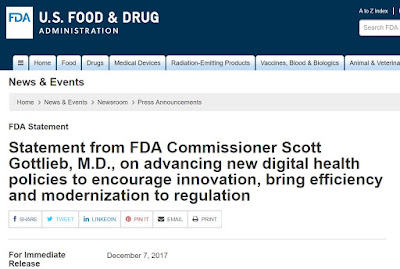 Extra credit assignment; See Bradley Merrill Thompson's detailed multi page (web) essay on CDS history at FDA, here.  Although undated, I believe from internal references it may cover until 2012, e.g. "there will be changes in 2012."  It's a reminder that the issues in play in today's guidances have percolated many years.