On Friday, September 22, 2017, after market close, CMS issued PAMA data (covering the whole lab fee schedule) and also issued its proposed rates for new CY2018 codes.  The data is voluminous and this opens a public comment period through October 23, 2017.

While Tier 2 codes did not have CLFS prices before, they did have average observed Pt B prices.  PAMA prices are noisy, but on average 6% lower. 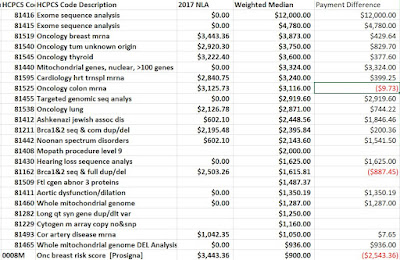 The July crosswalk/gapfill meeting was the first time CMS has priced PLA codes, the new Proprietary Lab Analysis codes being released quarterly by the AMA.

CMS faces what to do with codes that are currently being crosswalked to codes whose prices may change radically under PAMA.  For example, CMS recommends the new code 81413 (cardiac ion channelopathies) be crosswalked to Lynch syndrome 81435.  However, Lynch syndrome 81435 will be dropping from about $600 to about $38 under current PAMA data.  Where does that leave 81413?  CMS remarks, "Maintain the crosswalk finalized in November 2016" but I'm not sure if that means the November 2016 price of that crosswalk or the new $38 price of the crosswalk. (See page 29 of the 51-page crosswalk/gapfill PDF).

Paired Bar Chart: GSP Codes in 2017 and Proposed Under PAMA

In the chart below, 81416 Exome Comparator $12,000 is omitted to preserve the vertical axis.
Blue lines are current prices, Green lines are new PAMA prices. 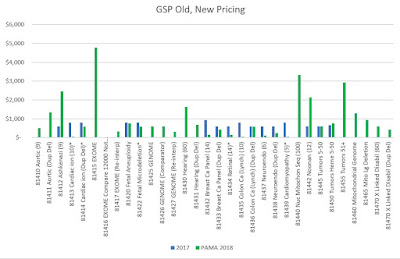 The chart below is a dot plot of current 2017 prices for GSP's on the x-axis versus 2018 PAMA prices on the y-axis.  The red line is equal pricing under 2017 CLFS and PAMA. 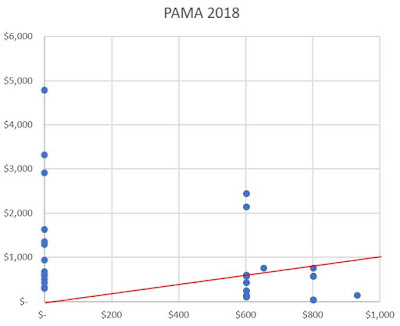 For a Sept. 20 article at Dark Daily, previewing PAMA, here.