On March 27, 2017, the National Academies (of Science, Engineering, Medicine) released a 149-page ebook on "Evidence Framework for Genetic Testing."  The federal consensus report  was requested by the Department of Defense Office of Health Affairs.  Download the free ebook here. 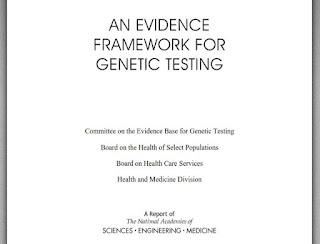 My 2014 coauthor Felix Frueh and I were surprised and pleased that an evidence framework we published was cited as one relevant example among six or seven approaches to assessing genetic tests.

At the time, Frueh and I were dissatisfied that the conventional framework of "analytical validity, clinical validity, clinical utility" - while "true" - lacked much guidance for resolving disputes.   We suggested that dividing analysis into six questions was a happy medium - one or two questions is not enough ("Does the test have clinical utility?") while a list of twenty to forty questions was not really manageable.   The six questions, developed entirely by Frueh, were:


In my experience, at least at the time, a successful test like Oncotype DX allows fairly straightforward answers to all six questions, whereas a generally unsucessful test (with payers) like beta-amyloid PET tracers, was hard to answer for nearly any of the six questions.   Perhaps understanding the test pretty well and then taking five minutes to jot down freehand answers to the six questions would be a good predictor of payer success or failure.

We noted that tests have many ways in which they can represent improvements (more accurate, faster, providing results that were unknowable before) and that since tests map to such broad health scenarios, the range of relevant health outcomes is also broad (whether survival, pain, shorter hospital stay, etc.)   We believed that if payers and lab developers communicated on the various axes, there would be fewer situations where the payer can do no more than state vaguely "there is not enough evidence" and where the lab complains equally vaguely that "payer standards are too high."