USPTF has a December 2013 current recommendation on BRCA-related cancers, covering risk assessment, counseling, and genetic testing.  Based on an earlier ruling of HHS, and now pretty clearly incorporated in the 2013 guideline,  HHS and USPSTF view genetic testing as part of the preventive guideline, which makes it copay-free under most insurance plans.

On March 16, USPSTF released a new plan to update its guidance.   The public can comment through April 12.   Arising issues include restriction of preventive screening to high-risk families versus population-wide screening.  As far as the draft plan goes, it continues to focus only on increased-risk families. 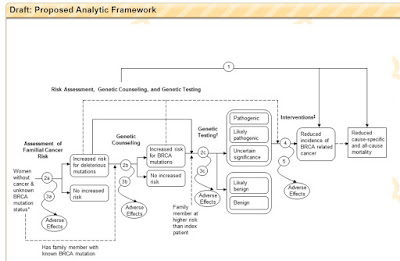 In general, under ACA, most health plans are required to provide USPSTF A and B preventive benefits and without copay.  CMS can adopt (import) USPSTF A and B benefits into Medicare via the NCD process. To date, it has done that for quite a few preventive services, but not for BRCA preventive screening.  CMS does cover BRCA testing in women already diagnosed with breast cancer, where results can guide ongoing management decisions.