Today, March 16, the USPSTF task force released for public comment the framework for an updated assessment of BRCA risk assessment, testing, and counseling (here).  It's the 12th anniversary of the USPSTF first guidance statement, in 2005 (here). Meanwhile, BRCA policy mavens will recall that this year is the 8th anniversary of AMA/ACLU filing a court case challenging the validity of some claims of the BRCA patent (here).   And in a couple months we hit the 4th anniversary of the Supreme Court decision that followed (here, here).   Meanwhile, we just crossed the 2nd anniversary of the resolution of several ongoing aspects of the patent litigation (e.g. Cook-Deegan, here), and College of American Pathologists/CAP TODAY just published an article on how the SCOTUS case has impacted diagnostic pathology (here).

I recently reviewed the cumbersome CPT/CMS approach to coding and pricing BRCA testing (here).  The flurry of anniversaries and events led me to look up some of the original SCOTUS documents this evening.

For three recent law review articles on the course of litigation, see an article by Sandra Park of ACLU (North Carolina Journal of Law & Technology, 2014, 18pp, here) and by Amelia Smith Rinhart of  Univ. Utah (UCI Law Review, 2015, 46pp, here) as well as the afore-cited article by Robert Cook-Deegan (here).

A large number of AMP v Myriad documents remain archived at the ACLU website (here), including the declaration of Roger Klein MD JD (here), whose argumentation was largely adopted in the final Supreme Court decision (here).

AMA’s brief, joined by the American College of Obstetricians and Gynecologists, devoted an entire section to arguments that patents increase the cost of genetic testing (citing “costs” 12 times,
access 11 times.)


“Today’s BRCA test costs $3000, despite the existence of other laboratories willing to offer testing for one third the cost.” (Page 24).  Such patents “harm patient care” and were an error of the Patent and Trade Office, which “has imposed untold costs on the healthcare system." (Page 27).

The AMA's brief remains on an AMA webpage dedicated to the topic, here.   The same language, “has imposed untold costs on the healthcare system,” had been used previously by the Association for Molecular Pathology, joined by the American College of Medical Genetics and the College of American Pathologists.    Petitioners wrote that the patent has “increased the costs of health care unnecessarily, making genetic tests inaccessible for many people” (page 11).   Citing costs 16 times and access 10 times.

One of the major patient-group statements, from the National Women’s Health Network, referred to costs 18 times and access 33 times (a total 51 times; here).

BRCA Pricing Did Not Change Nearly As Fast as Some Predicted

With complex technologies, such as biosimilars, new entrants generally find it is a better strategy to shadow price the market leader during an initial interval, with a price 10-20% lower and a market share of 10 to 20%.  We can see why in a simple model.

A Simple Model of Incumbent and Entrant 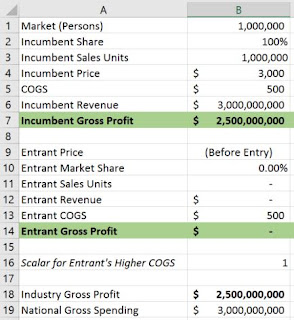 For example, in Column C, "Entrant" has entered the market, shadowing the market leader with a price of $2500.   Entrant gets 10% market share, which means the incumbent (which hasn't changed its price of $3000) now has a market share of 90%.   The economics would look like this: 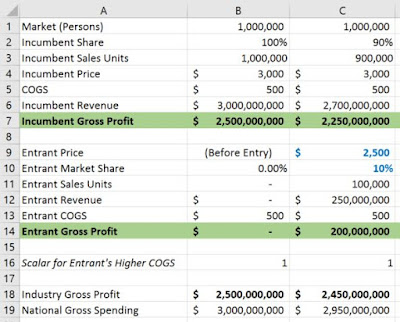 Let's look at what happens if the entrant gets more aggressive on price, gains some market share, and the incumbent maintains the same price.

At this point, let's try changing the dynamics of the incumbent.  In Model G, the incumbent responds by lowering its price to $2,500 and raising its market share from 60% up to 75%.

Although incumbent sees a tiny bump in total revenue, it sees no change in its gross profit (line 7 was at $1.5B in Model F and it's still exactly $1.5B in Model G).

This is just a Tinker-Toy model with a few lines, and there's no assertion it foots to actual data on market elasticity, although we do know that shadow pricing is the typical strategy in markets with only a few entrants, like biosimilars.**   The model suggests that it's tough to be a market entrant, that under a number of conditions the incumbent has a viable strategy of not changing its price, and that later price cuts by the incumbent might hurt the entrants more than the incumbent (F, G).   It's only a what-if model:  what if price was "this" and market share was "that."   Still, like other microeconomic models, it's more accurate than what most people can guess in their heads.  As in the consensus forecast of Wall Street in 2013/2014, and as correctly forecast by Rinehart, the incumbent was likely to "lead the market in question for some time" (here, p. 1179).

In January 2016, CMS rolled out a price of $2503 for a new version of the BRCA code created by an editorial decision of the AMA.

Amazingly, all these prices exist at once -- with almost exactly a 300% or 3-fold variation -- depending on arbitrary MAC rules and coding choices.

This is a crazy situation, where, based on 2015 BRCA utilization, national CMS spending for BRCA could vary arbitrarily from less than $18M to over $50M.

Probably not by much.

According to CMS data, 72% of national BRCA spending in CY2015 was paid in Utah, suggesting the national median will be no lower than (and probably higher than) the 30th percentile price of labs in Utah.****  Recall that in 2015 litigation on BRCA patents and market entry was still ongoing, so the market rate reporting period for PAMA (in early 2016) will be little different from 2015 market dynamics.

The pricing of the newer codes, 81162 and 81432/81433, were available for reporting but probably not too widely used in 1H2016, so their median pricing will be more of a wild card and could be either higher or lower than current fee schedule prices.   Another wild card will be if CMS applies its "panel pricing" policy, by which any several components of a panel cannot be paid more than the whole panel (here).

We do know that the 2017 cost of goods sold is likely in the $500 range, based on COGS stated publicly by labs like Invitae and Fulgent (here and here).   In highly competitive markets for simpler clinical chemistry tests, market prices tend to settle at about double COGS (see e.g. annual financials of Quest and Labcorp).

We started with AMA's statement to the Supreme Court - "Today’s BRCA test costs $3000, despite the existence of other laboratories willing to offer testing for one third the cost.”  Whether from a market entry perspective or a coding/pricing perspective, it's a long and very complex journey from one point to the other.

*** PAMA (Section 216) is a law that will reset Medicare pricing for laboratory tests to the median of reported market prices in 1H2016, the new pricing to be announced in 4Q2017 for implementation in CY2018.  E.g. here.

**** 30th percentile of labs in Utah: If the 28% of services outside Utah are all at prices below the very lowest price paid to a lab in Utah, then the 30th percentile of the 72% of Utah services will sit exactly at the median USA price.  Commercial payer prices paid to large labs in Utah in 2015 were probably $2500-3500, hence, the new PAMA 2018 price based on a survey at the beginning of 2016 will set the US Medicare price all the way out to 2021.