It's a Chaotic Mess: CMS Pricing of BRCA Testing

When assessed by CY 2015 payments in the fee-for-service Medicare Part B system, BRCA testing is the third-largest expenditure, at about $52M per year.  However, the situation for CY 2017 is going to be much more complex, as there are now three different coding approaches, all recognized by CMS, resulting in drastically different Medicare expenditures for BRCA testing.

Depending on which set of rules and codes are applied,  payments could be anyone from $931 all-in for a BRCA panel including full dup-del analysis, all the way up to $2,780 for individual genetic components of BRCA 1 and BRCA 2 testing.

Assuming similar test utilization in 2017 as in 2015, Medicare's total payments could be as low as $17.9M this year or as high as $51M.   This article discusses how Medicare backed itself into this mess.   A shorter second blog (here) asks whether CMS panel pricing rules can or should apply to BRCA testing. 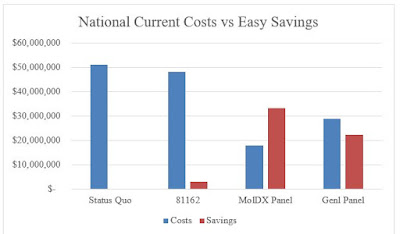 The Transition for Method-Based Stack Codes to Gene-Specific Codes

Between the 1990s and 2013, the AMA provided a "method based" code set for human genetic testing.   This involved a small number of codes that described lab steps, such as DNA extraction and DNA amplication, typically paying about $20 each.   For example, a particular genetic analysis might be billed as "DNA extraction x 1, $20" and "DNA amplification x 10, $200."

For the CY 2013, AMA produced and CMS began using large numbers of new gene codes, each specific to a named gene.   During 2013, CMS had all of these priced under the gap-fill method, so there were no published reference prices until 2014.   For a side bar on this process, see here.

For Cy 2016, AMA also introduced a pair of codes that reflect testing of BRCA-1, BRCA-2, and other breast and ovarian risk genes.   The main code, 81432, is for sequencing.   The additional code, 81433, is for dup-del analysis, if performed.   In summer and fall of 2015, CMS determined that these codes should be priced by the MAC "gap-fill method," so these codes went live in January 2016 with local, unpublished pricing by CMS MACs.   (By 2016/2017, most MACs have local policies or LCDs for BRCA testing and most allow coverage of either BRCA-1&2 or the panel code.)

25 states falling under 6 MAC regions and 4 different MAC companies don't appear to pay for 81433.  These states have opted into the MolDX uniform molecular policy program.

All of these prices exist at once:

That's chaotic.   The lowest-priced codes (81432, with or without 81433) include the medical reports provided by doing BRCA-1 and BRCA-2 sequencing, while paying as little as one-third the money. 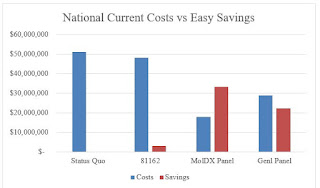 To the costs and savings in perspective, Medicare's CMMI states that "12 Pioneer ACOs generated almost $37M in total savings in 2015."  This was based on a truly colossal amount of work and effort by CMS and by healthcare systems, with a couple years of preparatory work and a year of program activities.

From these tables, it looks like if it wanted to, CMS could save the same amount of money in 2017, about $33M, in about ten seconds, by capping its BRCA payment rates at $931, the panel rate in MolDX states.  To visualize the comparison, here: 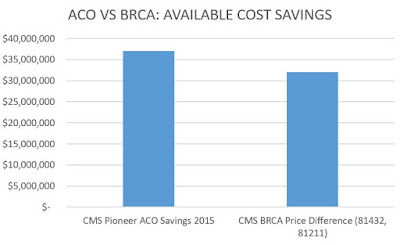 Can CMS do that?  See the next blog, here.

For a September 2016 blog on the emerging price disparities, see here.