On January 24 and January 30, the Executive Branch issued two Executive Orders, one stopping the issuance of new regulations, and one requiring that two regulations be sundowned for each new regulation created.   See coverage and links at Forbes, here.

On Thursday, February 23, the Cahaba MAC issued a notice that it was canceling the CAC (Contractor Advisory Committee) meeting for new LCDs that would have occurred in mid-March.  See Cahaba's notice here.   Cahaba "anticipates" that CAC meetings and LCD production will eventually be resumed, possibly by late June.  Cahaba notes that the change is explicitly based on CMS instructions to halt LCD production until further notice. 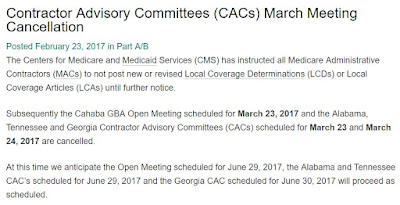 Update March 8.  By March 8, at the same website, Cahaba still states that its March CAC meeting is canceled, but has removed the reference to a CMS instruction for having canceled it. Above, a screenshot of the notification - as it appeared originally in February.    Thanks to a reader for the heads-up.


Clipped from Cahaba website.  Cahaba manages Medicare A & B in Tennessee, Alabama, and Georgia.  "CAC" meetings are required before the issuance of new LCDs.  They are typically gatherings of 10-20 physicians who represent a range of specialties (internal medicine, surgery, cardiology, etc) and are a standing body of panelists that Medicare medical directors can use for specialty advice and expertise.   See Section 13.8.1 at this government manual link, here.

By March 2017, Cahaba had removed the reference to a CMS instruction.  The clipping below reflects the posting, as it read originally, in February.

The Centers for Medicare and Medicaid Services (CMS) has instructed all Medicare Administrative Contractors (MACs) to not post new or revised Local Coverage Determinations (LCDs) or Local Coverage Articles (LCAs) until further notice.

The FDA has approved three drugs since the ban on new government regulations, etelcalcetide for hyperparathyroidism (February 8), deflazacort for muscular dystrophy (February 9), and brodalumab for severe psoriasis (February 15).