Medicare (via internal reviews and/or via OIG actions) has increasing authority for long-term exclusion of providers from the program.  I ran a blog on one expansion of exclusion authority in February 2015 (here).  That allowed "revocation of Medicare billing privileges" if the entity "has a pattern of submitting claims that fail to meet Medicare requirements."  This is of interest because of trade journal reports that as many as 75% of genetic/genomic claims may go unpaid, across Medicare and private payers.  Sounds like that could be "a pattern of claims that fail."[*]

More news.  On January 11, OIG published enhanced regulations expanding its exclusion authority in cases where providers are not compliant with or obstruct audits. 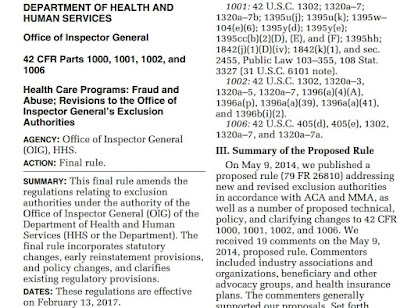 This is also an example of the broad reach of the ACA and the impacts of "repealing Obamacare," as these far-afield regulations over at the OIG stem, in part, from a few phrases originally embedded in ACA lawmaking
_________

Exclusion for "excessive claims...or unnecessary services" is found at 42 CFR 1001.701. Note that via new lawmaking, this will be updated with new text in February 2017.