If They Don't Like Your Service, CMS Can Suspend Your Enrollment!

On December 5, 2014, CMS finalized a rule with the obscure title, "Medicare Program, Requirements for the Medicare Incentive Reward Program and Provider Enrollment."   It's hard to see the "Incentive Reward" part of it, because the prologue immediately summarizes all the bad stuff: Expand how and when a felony conviction can kill your enrollment; they can also keep you out for having "a relationship" with a prior entity that had Medicare debt.  (79 Fed Reg 72500ff, here).

The more interesting (for us non felons) and open-ended part is authority to revoke billing privileges for "a pattern of submitting claims that fail to meet Medicare requirements."  (42 CFR 424.535(a)(8)(iii).) 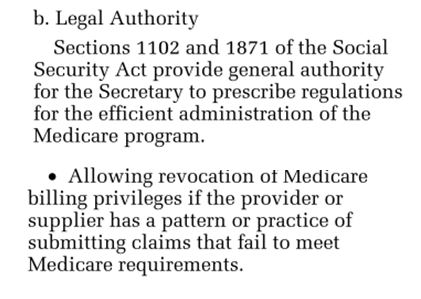 The specific regulatory language follows.  There are two types of abuse of billing privileges.  The first is claims for services that could not have been furnished (e.g. the patient was dead).  The second is claims that "do not meet Medicare requirements" such as medical necessity.

42 CFR 424.535(a)(8) [here]
Abuse of billing privileges. Abuse
of billing privileges includes either of
the following:
(i) The provider or supplier submits a
claim or claims for services that could
not have been furnished to a specific
individual on the date of service. These
instances include but are not limited to
the following situations:
(A) Where the beneficiary is deceased.
(B) The directing physician or
beneficiary is not in the state or country
when services were furnished.
(C) When the equipment necessary for
testing is not present where the testing
is said to have occurred.
(ii) CMS determines that the provider
or supplier has a pattern or practice of
submitting claims that fail to meet
Medicare requirements. In making this
determination, CMS considers, as
appropriate or applicable, the following:
(A) The percentage of submitted
claims that were denied.
(B) The reason(s) for the claim
denials.
(C) Whether the provider or supplier
has any history of final adverse actions
(as that term is defined under § 424.502)
and the nature of any such actions.
(D) The length of time over which the
pattern has continued.
(E) How long the provider or supplier
has been enrolled in Medicare.
(F) Any other information regarding
the provider or supplier’s specific
circumstances that CMS deems relevant
to its determination as to whether the
provider or supplier has or has not
engaged in the pattern or practice
described in this paragraph.

Among general comments, a commenter expressed concern that the proposed rule would give CMS staff "unprecedented discretion to revoke Medicare billing privileges." (p. 72526).  To another commenter, it was not clear whether the revocations would replace existing Corrective Action Plans (p. 72523.)

The "Abuse of Billing Privileges" rule receives several pages of public comment and CMS responses, beginning on page 72513.   It was argued the rule was "too arbitrary and subjective" for lawmaking (p. 72513).  CMS wants to apply the "improper claims" count to claims under appeal, because the appeals might be "meritless."   CMS will apply the revocation if the claims are unpayable to one party (a laboratory?) because documentation of another party (a doctor?) is unavailable or inadequate (p. 72516).

Another commenter pointed out that medical necessity, as demonstrated in LCDs, may vary from one state to an adjacent state, and a provider could be revoked from the national program due to claims that do not pass an LCD in his state.  (ibid).

CMS declined to set a threshold of claims denials that would invoke the revocation process (e.g. above or below 50% - no number is specified).

CMS cannot estimate the number of potential revocations (p. 72527 [point D] and also p. 72528 [point 4]).  However, CMS remarks that "Denials and revocations under, respectively, § 424.530(a)(6) and § 424.535(a)(8), will not occur until after a careful examination by CMS of: (1) The level of undue risk that the unpaid debt poses; or (2) the criteria for determining whether the provider or supplier has a pattern or practice of submitting non-compliant claims. As such, while we anticipate an increase in some denials and revocations under these two provisions, we do not believe they will impact a substantial number of small entities."   (p. 72528).

___
For an open-access article on termination of provider enrollment in National Law Review, see here.

For a 6/2015 news article on OIG beefing up its provider exclusion task force, see here.

On a related note.   While the authority for the enrollment revocation discussed above is given as "general authority to prescribe regulations," there is another problem for providers raised by the Affordable Care Act and not yet resolved by CMS.   Under the ACA, providers must report overpayments within 60 days.  Penalties and treble damages accrue rapidly if you don't.  However, what an overpayment is, and setting the day it is "identified" rather than "suspected, possibly, or gray" is impossible to classify.   CMS recently deferred rulemaking on this topic, but according to a article by Thomas Zeno at Squire/Patton/Boggs, the DOJ is already prosecuting under the statute (see here).  Statute at this weblink (see (d), here).