On December 22, 2016, via the CMS website and the Palmetto MAC, the MOLDX program released eight new LCDs.

In addition, three brand-specific LCDs offer coverage is offered to Castle Biosciences for its DecisionDX test for high and low risk uveal melanoma, the VitaRisk pharmacogenetic test for acute macular degeneration, and Xpresys lung cancer diagnostic test for classification of uncertain lung nodules.  In an expansion of coverage, the seventh LCD extends Prolaris test coverage from low risk patients to include intermediate risk patients.  Finally, in the eight LCD, Medicare proposes to revoke coverage of the Myriad Vectra test. (Click photo to enlarge). 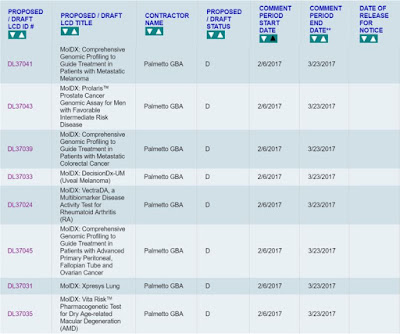 In a twist, the new LCDs do not have "CDD."  In addition, modifying a ninth LCD, MolDX has deleted the registry requirement from its existing lung cancer genomic LCD (here).

Coverage at Genomeweb here and here.  Details and links after the break.

The MolDX MAC has covered comprehensive genomic profiling (CGP) for lung cancer patients for over a year, but until now required an elaborate registry as a condition of coverage (here).

The new LCDs proposed to extend coverage to patients with certain types of colorectal cancer, ovarian cancer, and malignant melanoma.   In recent investor calls, Foundation Medicine CEO Michael Pellini has discussed his company's progress in Medicare negotiations, toward the goal of expanding Foundation One coverage beyond just lung cancer patieents.  These three LCDs, which will apply to Medicare claims from FMI's North Carolina lab, seem to fulfill that effort.  Across the collected CGP coverage updates, none (neither lung, nor the new ones) will require any registry.

According to data presented in August 2016 by Myriad Genetics on its website, for the Vectra rheumatoid arthritis test, revenue was running about $10M per quarter (roughly 10% of its hereditary cancer quarterly revenue); but coverage was available from very few payers other than Medicare.  (This, based on a pie chart prepared by Myriad of commercial and federal coverage.)  With the new proposed Vectra LCD, Medicare would withdraw coverage for Vectra.  The LCD cites (A) lack of society guideline support and (B) recent "conflicting studies," at least one of which is open access (Fleischmann, 2016, here).


The change in Vectra coverage, focusing on the lack of major society guidelines, echoes a May 2016 event.  At that time, MolDX proposed to match its LCD coverage for a number of breast cancer tests to exactly the position in an ASCO guideline, no more, no less (here). That effort was tabled and Medicare coverage remains somewhat broader than ASCO guidelines.

Several tests are covered by MoldX for assessing low risk prostate cancer patients, at time of biopsy, and helping to assure doctors and patients the patient indeed has both clinically and moleculary low risk disease, and thus is a good candidate for prostate surveillance rather than radical procedures.   These three tests include Myriad Prolaris, Oncotype DX Prostate, and the Genmark Promark test.   With the new LCD, only for the Prolaris test, coverage would be extended to include intermediate-risk cases in the post-biopsy decision setting.

StreetInsider published a statement in which Myriad applauded the expanded Prolaris coverage but said it would appeal the noncoverage of Vectra, here or here.  Overall, on the morning of December 23, Myriad's share price trended downward from about $17.60 to about $16.70, reflecting a dip of about $60M or 5% of market capitalization.

This set of LCDs does not have explicit "Coverage with Data Development" conditions.  The gene panel LCDs make statements similar to this:


This contractor recognizes that the evidence for clinical utility for CGP in individuals with metastatic melanoma is limited at the current time. However, this contractor believes that forth coming clinical studies in this disease will improve patient outcomes and change physician selection and management of targeted therapies and immunotherapies for individuals with metastatic melanoma. Continued coverage of CGP for metastatic melanoma will be dependent on annual review of prospective scientific data submitted by performing laboratories and review of peer-reviewed publication that demonstrates enhanced clinical utility for CGP testing.

The other four LCDs, for the DecisionDX uveal melanoma test,  VitaRisk and Xpresys tests, and for Prolaris Intermediate Risk, have roughly similar language (coverage contingent on regular review of ongoing studies.)   The Xpresys test has had a several-year path to coverage since market launch, and is provided by Integrated Diagnostics of Seattle. co-founded by Lee Hood (biography).  InDx raised an additional $6M for commercialization in the wake of the LCD, and hopes to raise $30M in 1Q2017 (here).   The Xpresys and Veracyte Percepta lung cancer tests aim to aid decision-making for large numbers of patients with uncertain abnormalities found as a result of low dose CT lung cancer screening.

In the MolDX LCD for somatic tumor gene panels (CGP) in lung cancer, Palmetto has also deleted the longstanding requirement for a registry (see my discussion here).   For lung cancer, MolDX now writes:


This contractor recognizes that evidence for clinical utility for CGP in advanced NSCLC patients is limited at the current time. However, this contractor believes the clinical studies currently in progress will identify a number of patients who will test positive for an actionable EGFR, ALK or ROS1 mutations or identify mutations despite prior negative test results in patients who will benefit from targeted therapy. In addition, CGP testing is likely to identify patients who will need referral/genetic counseling for hereditary cancer risk assessment when an APC, MYH, MLH1, MSH2, MSH6, PMS2, EPCAM, POLE, POLD1, BMPR1A, PTEN or STK11 alteration is identified in the test panel. The identification of other pathogenic genes, although not meeting Medicare’s reasonable and necessary criteria for coverage, will likely direct patients into clinical trials. Continued coverage for CGP test for NSCLC will be dependent on annual review of publications and/or presentations of clinical utility data demonstrating CGP for NSCLC improves patient outcomes and/or directs or changes selection of therapies to improve patient outcomes.

From the Palmetto JM website, click on Draft LCD Status Report and look for all LCDs with a comment opening date of February 7, 2016.  Here.  (Note there may be 2 pages of results to click through).

I have also put a zip bundle of the draft LCDs in the cloud, here.  There are 8 new LCDs in the zip, plus a copy of the revised non-registry Lung LCD.

Finally, I have clipped the CMS website html below, which should also work.


And the revised Lung Cancer LCD, L36143, in which the previous "registry requirement" or CDD is deleted: